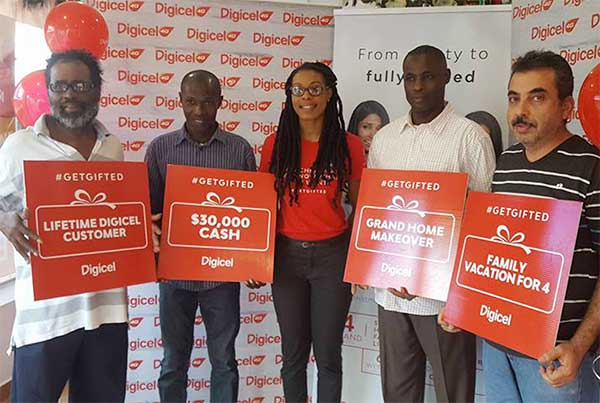 DIGICEL has yet again delivered in transforming the lives of its customers.

This followed the grand announcement of the winners three days earlier on The Wave radio station. Michael Ephraim emerged as the prepaid winner, Michael Charles as the postpaid victor, the 3 in 1 activation champ was RamezCheriki and a very elated Gabriel Felicien who purchased a specially discounted smartphone during the #GetGifted campaign period, was the fourth winner.

Fast forward to Saturday January 7, for the grand prize selections, the fate all lay in the hands of the final four. The gentlemen all dipped for order of selection of their lucky balloon which each held a special key which would then open one of the four treasure chests. The suspense of the afternoon would eventually subside as Ephraim opened his chest to the gift of a Lifetime Digicel Customer, Charles got gifted with a grand home makeover, Cheriki walked away with a family vacation and Felicien left $30,000 richer!

The store was immediately filled with cheers, excitement and high emotions by winners and accompanied family members. Charles, winner of the grand home makeover embraced his prize with great emotion while Ephraim was at a total loss for words while trying to digest the news of him becoming the first ever Lifetime Digicel Customer in St. Lucia.

Cheriki expressed deep gratitude to team Digicel for his vacation, while Felicien was bursting with joy while celebrating with his son having added $30,000 to their family name.

In addition to the grand four prizes, Digicel also concluded its Christmas Text to Win promotion on December 31. Customers were required to text ‘GIFTED’ to 7171 to win their share of $10,000.00 cash. Julia Cadette who finished in first place at the end of the promotion was overly emotional and tearful, as she was informed that she had just become $5,000 cash richer. Upon regaining her speech she expressed immense appreciation: “Thank you so so much Digicel, the Christmas season was a really difficult one for me, so to start off the New Year in this way makes up in many ways I can’t begin to explain. Thank you”.

The second place winner was Agatha Herman who also won herself $5,000.00 cash.

Marketing and Communications Executive at Digicel Miss Louise Victor commented on the culmination of this exciting campaign: “Upon launching our #GetGifted promotion we did promise that it would be nothing short of life changing and today is undoubtedly a manifestation of this. Each one of our grand prize winners have unique stories and we are honoured to help enrich and impact their lives with these grand gifts. This is quite a wonderful way to start off the New Year with our customers, coming off the heels of such an incredible Christmas season.

“We built the momentum from the launch of the campaign in November and rewarded hundreds of customers with in store gifts, weekly gifts, through various community initiatives and via social media. We were also glad that we were able to give back to St. Lucia as extensively as we did through the social components of the campaign. We would like to congratulate all winners and thank everyone who participated in our #GetGifted promotion and contributed to making it the success that it was. “

Digicel extends well wishes to all its valued customers for the year New Year 2017 and beyond and thanks St. Lucia by extension for its continued patronage.