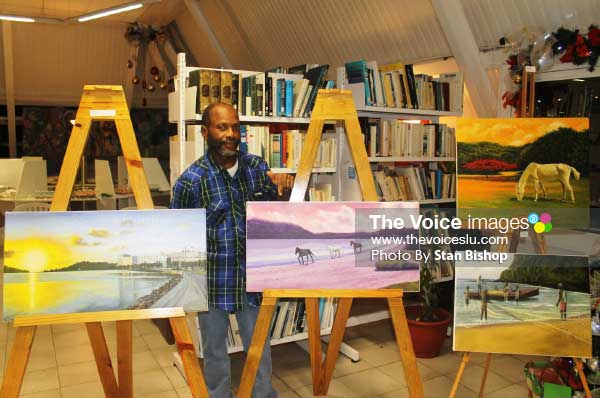 CEDRIC George has the knack for making the obvious seem magical after a few brushstrokes on a framed canvas. Considered among the best on the local art scene, he has painted his way into the hearts of art lovers both here and abroad. But hold your breath – this talented artist isn’t done yet.

George took up art around age 4 but began painting seriously at age 21. His father, Mc Donald George was from St. Kitts and his mother, Mary Magdalene George, from Saint Lucia. However, while creative talent was plentiful in the home, it was out of necessity to face down his childhood fears that Cedric took up drawing as a hobby.

“My first drawings were of Papa Djable,” George admitted. “I was so petrified every time I saw people portraying him that I felt the only way I could get over my fear was to draw him. By doing that, I was actually able to overcome my fear.”

He attended the Gordon & Walcott Memorial Methodist Primary and later St. Mary’s College, conquering every challenge that had art drawn over it. In fact, from his infant school right through to tertiary level years, he was always the top student in art. But it was his father’s day job that left an indelible impression on George’s passion for the craft.

“My father was a commercial painter, which is now referred to as a graphic artist. Basically, he was told what to paint by his clients unlike us fine artists who paint what we want. So good was he that he was the leading commercial painter in Saint Lucia. So I grew up watching him paint and began doing commercial painting with him,” George explained.

George said he found that commercial painting was unlike the traditional fine art, which was what he wanted to do. He wanted to do “something more serious, meaningful and organic”. So he ventured out in search of his own style.

In 1985, George received a three-year scholarship from UNESCO and went to Jamaica where he studied art at the Edna Manley College of the Visual and Performing Arts, graduating with honours and distinction. He said he found the college to be a very formidable and profitable institution that offered “solid and deep courses”.

“It was hard work, really. But I soon realized that whenever someone left that school, they were well on their way to making their own mark in the world,” he said.

Upon his return to Saint Lucia in 1988, he was assigned to the Ministry of Education where he served as the art officer for schools until he left that post in 2004. He also worked in the community with school-leavers, helping them hone their art skills through the various workshops he organized.

“My post at the ministry involved me organizing exhibitions, discovering and developing new talent and encouraging them. Rufus Darcie was among the artists I trained during that period,” George said.

In his paintings, George uses various mediums and tries to not have any favourites. Whether he paints a piece using charcoal, water colours, pencil or oils, the benchmark is that the pieces must be at the same level in terms of quality and detail. After mastering virtually all the mediums, he came up with a new form, Organometrics, which is an amalgamation of two elements – organic and geometry.

George described Organometrics as a visual philosophy and stylistic vocabulary that is based on the belief that organic and elements are one. With Organometrics, he has somewhat departed from traditional art and ventured into a more conceptual style to create texture and space. Through the use of vibrant colours and textures, George’s paintings draw on both classical and modern sources for inspiration.

“The paintings may start out deliberately two-dimensional. However, a three-dimensional illusion is created using parallel lines and broken colour,” the Sunbilt, Castries resident said.

Apart from being part of exhibitions locally, George’s work has been showcased in the United Kingdom, United States, Santo Domingo, Barbados and Trinidad and Tobago. His mesmerizing depictions of life’s beauty adorn the inner walls of many commercial buildings and the National Archives in Saint Lucia. Moreover, one of his paintings now hangs in the Bank of England Museum. He is currently planning to stage an art exhibition later this year, saying the benefits to being an artist are limitless and goes beyond just money.

“There’s money in art. However, one must not be greedy but must be willing to learn the craft and grow with the client. As you begin to build up your name, you are able to add value to your work which in turn attracts customers willing to pay whatever prices you charge,” George explained.

George is a member of the Artist Circle, a group of artists who meet regularly with the objective to rejuvenate interest in art and make it a ubiquitous staple in public spaces. The group held its first public exhibition at Alliance Francaise last December, showcasing the works of nine of its members, including George’s.

Having found his passion for his craft at an early age and fame that ranks him among the best in his field, George said art has shaped his views about life and allowed him to channel his talents in a colourful way. As long as there are empty canvasses lying around his studio, it seems this indefatigable artist will continue to paint his passions colourfully. He also had some advice for anyone hoping to get into the business of colours.

“For anyone wanting to get into art, the love for it must be present. There must also be a great deal of dedication and patience to the craft. Always grasp at the opportunities to exhibit your work,” George explained.