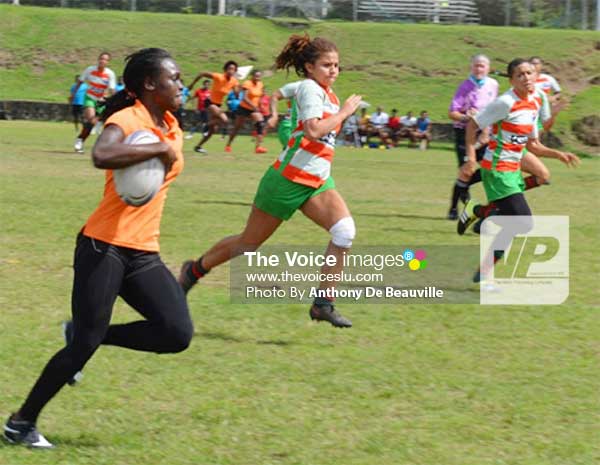 ROGUES Rugby male team from Saint Lucia and Guadeloupe’s female team shared honours as the curtains came down on the Saint Lucia Rugby Football Union’s calendar of events this past Saturday at the Gros Islet playing field.

In what can best be described as a keenly-contested showdown of all among the matches played under the scorching heat, the Guadeloupe ladies were made to fight for their, win while it was a walk in the park for the Saint Lucian men.

The one-day event consisted of two rounds; the first round was a round robin and the second round a knockout to determine team rankings.

In the female category in Game 1, Le Sport caught the highly-fancied Guadeloupe team flatfooted, defeating them 17-10. For the Guadeloupe technical staff, it was a surprise defeat.

In the final, Guadeloupe defeated Le Sport 17-12 in a game that could have gone either way. The Le Sport team has itself to blame for not bringing its ‘A’ game into the final. Their numerous indecisive and inaccurate passes cost them their first national championship against a French team that grew in confidence as the day progressed.

In the men’s division, there were victories for Fighting Mongoose over Whiptail Warriors (21-18). Rogues Rugby, under Captain Irvin Joseph, trounced Fighting Mongoose 21-7. In the final game of round robin format, it was a ding dong battle between Rogues Rugby and Whiptail Warriors, but in the end, speed, agility and a die-hard attitude from Rogues Rugby with the twin brothers Irvin and Germain along with Jerry Charles proved a little too much for Whiptail as they succumbed to a 21-19 defeat.

It was all to play for in the final between Rogues Rugby and Fighting Mongoose but certainly the Fighting Mongoose, known for their aggressiveness against their prey, did not live up to their name as they were blown away by Rogues Rugby 49-5 in a one-sided affair to claim their second consecutive title in a month.