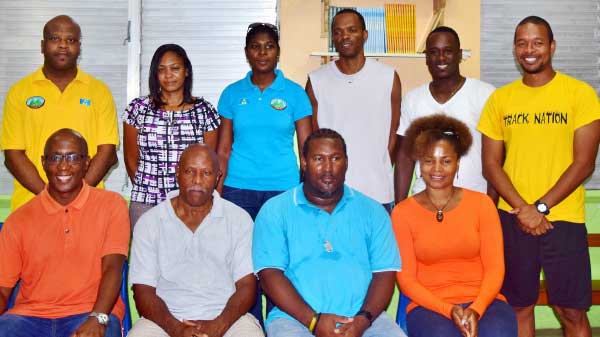 Andrew Magloire Back as AA Prez.

Magloire, who is also president of the Saint Lucia Coaches Association, defeated the incumbent Wayne Burton for the top post by a vote of 17-6.

Magloire is a veteran coach and official and was previously SLAA president from 1989 to 1992.

The business of the meeting was two-fold: a motion to remove the central executive, and (should that motion pass) election of a new central executive. Jim Xavier, Director of Youth and Sports in the Ministry of Youth Development and Sports, was the presiding officer.

Of the ten affiliates present when the meeting was called to order, nine voted for the dissolution of the central executive, with one abstention. That opened the way for election of a new group to lead the affairs of the national governing body for track and field in Saint Lucia.

School teacher at the Ave Maria Primary School, Rochelle Jn. Baptiste, was elected secretary by a vote of 14-8 over coach and former vice president, Henry Bailey.

Brendaline Descartes, secretary of the Road Busters Club, was retained as assistant secretary, while President of Morne Stars track and field club, Terry Finisterre, who is also the 2nd vice-president of the Saint Lucia Coaches Association, was elected treasurer 9-8 over Burton. Youth and Sports Officer in the Ministry of Youth Development, Dane Magloire, was appointed public relations officer unopposed.

Gimry Lewis of Blazers Track and Field Club and Rena Samuel of Night Riders floor representatives. The new central executive will serve up until September 2018.

Following the election, the newly-elected president said, “There are quite a few challenges; we know very little as to what was happening with the former executive. We didn’t like the way it was managed and there was very little transparency. What we are saying now is to take the association back to the clubs, broaden our base of support and get the clubs involved in what we are doing. Come January 2017, the SLAA will be meeting with all affiliates and persons interested in track and field in Saint Lucia.”

In terms of the SLAA constitution, Magloire said, “We have a constitution which is badly written and difficult to understand. We need to get that constitution reorganized so that our affiliates can understand it; most of them don’t understand what’s in there and the language is terrible.”

He continued, “The new executive intends to raise the profile of track and field in Saint Lucia. In the past, the SLAA has been losing athletes to football — male and female — and we are hoping to come up with a good programme to help stop that flow into football as we look to retain as many athletes as we can. We are hoping to make a bigger impact on the regional and world scene. We are not ending 2016 in the way we ought to, but on the horizon we have quite a few youth athletes who will make us proud at CARIFTA, World Youth and Commonwealth Youth Championships.”