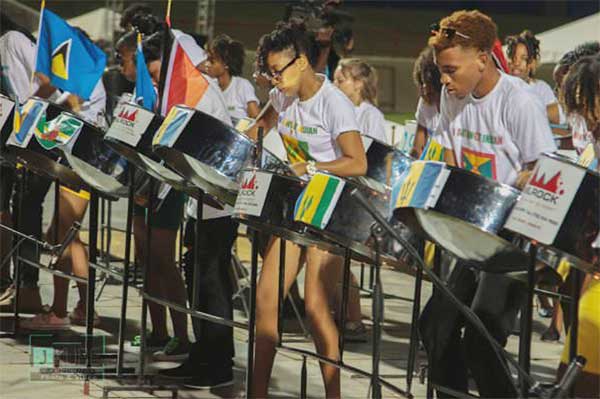 SOON it’ll be Christmas, and for some of us it will be a time of reflection on the birth of Jesus Christ. For many of us, it will be a time for merriment – a time of black cake, ham and turkey, sorrel and ginger beer, and of course rum. A time of parties, and if we’re lucky, we might even hear a little of our own Christmas music as we enjoy ourselves.

Over in Trinidad & Tobago, Christmas is about all of the above and more. More than anything, for some, it is about music. It starts off with parang, that Venezuelan folk music introduced to many of us by the calypsonian, Scrunter. Officially commencing at the beginning of November, parang season closes at the beginning of January, and somewhere in between those dates the traditional Christmas music in all of its various local interpretations slides in.

While all of this is happening, there are the more formal concerts and choral productions. For anyone interested in music or theatre or the arts, Trinidad is a wonderful place, particularly at this time of year. From parang, to soca and calypso, to interpretations of classical music and opera, music abounds.

And then, there is pan – steelband music. If listening to pan at carnival time does not move you, then listening to a steel orchestra interpreting Christmas music absolutely will. That experience is on par with the concerts put on by traditional orchestras, the main difference being that with the traditional orchestra, the musicians are all formally trained and play professionally. The other difference is that while the traditional orchestra uses a variety of instruments, woodwind, string and brass in producing their sound, the steelband is really only one instrument, a steel drum, cut and tuned differently to produce that orchestral sound. Magic.

And so it was that on an evening as Christmas approached three years ago, I found myself at Barnard Hill listening to a group of young persons practicing for the token performances which they pick up at this time of year, and was blown away by the experience. “Angels We Have Heard on High” was the tune being played, and the steelband was North Stars. A small group, maybe about ten or so, playing the notes that they were instructed to play by a genius, Ivan Smith (“Scrubb”).

That Ivan is a musical genius is recognized by most people in the steelband world, here, and in Trinidad. Ivan is recognized and acclaimed by those who themselves receive the greatest acclaim in Trinidad for their prowess on the steelpan, and for their arrangements for steel orchestras. But his music is not written anywhere. It is in his heart and in his mind, and in his hands, and the tone of the pans which he tunes is untouchable. But today, Ivan’s spirit is broken, and the pan-yard is silent.

Ivan’s story and the story of North Stars is the same as it is for any other steelband on the island. It is a story of neglect, a lack of respect for steelpan music, and then of disrespect. According to Ivan, he is owed money for a Panorama from years ago, so he refuses to play now. And we all suffer.

We have seen pan grow from its tiny origins to the point where school children were having their own competitions at the National Cultural Centre grounds. Grow from the point where Panorama had to be moved from the Vigie Sports Complex to the Darren Sammy (Beausejour) Stadium as the Sports Complex could not accommodate the crowds that this music was attracting. Grow to the point where it could practically fill the Darren Sammy Stadium and then collapse, so that this year, there were no big bands left to compete. And so the Panorama this year saw two medium sized and three small bands competing at Beausejour.

It would have been heartbreaking, except that the winner of the competition came from Laborie, and in a gesture that should not go unnoticed, Cecil “Torti” Philgence, the leader of Pantime Steel Orchestra, that long-standing band that was beaten in the competition, not only congratulated the relative new-comers, Laborie Steel Orchestra, but expressed his happiness over their winning in a call to Radio St. Lucia. Torti’s reasoning? That the win for Laborie would encourage their growth and development – much respect is due to that pan stalwart.

The stories that you hear from every pan leader regarding the Panorama competition are the same – the difficulty in meeting the cost of building and tuning the pans, buying the racks which carry them, paying for the transportation of players to practices and then transportation of the band to the show, and of course paying the players some money for having played in the competition. Sponsorship helps, but it does not meet the cost of producing a panorama steelband, and even if you should win, the prize money does not go a long way towards meeting the difference.

During that phone call to Radio St. Lucia however, “Torti” also made another revelation, which was that most of the players in his band did not come from Gros Islet. This is in stark contrast to the statement of the leader of the Laborie band, Ms. Quill Barthelmy, who indicated that her players came essentially from the community, even if help came from outside of it. It leads you to wonder what has happened at Gros Islet, as pan sides have traditionally come from communities.

In a way, pan sides are like our cricket and football teams. They come from, and represent communities. So that at competition time it is not just the 120 (maximum) players beating on a stage, but it is the involvement of a few hundred more assisting with the production, and then the hundreds from the community who come to support their band even if they know that it has little chance of winning. And of course, when “our” band loses, we know that it is because the judges “tief” – we support our community steelband and football side in victory, and in defeat.

But if pan is losing community support it is because the communities have lost our support, and the Laborie band is the exception that proves the rule. Some years ago steelband was introduced to the schools in many of our communities, and in one or two of them it caught on. So that even when we lost a vibrant and growing band from Vieux Fort, “Hanco”, we seem to have gained a new one in Laborie – that band is only ten years old.

We know of the community building impact that introducing steelbands into our schools and our communities has, and we also know of the well documented impact which music has on the development of children. Not only does it instill discipline and help with the improvement of children’s overall school performance, but it also assists with their study and understanding of mathematics.

But in talking to someone who knows about these things, we are told that the cost of a community music programme is about $70,000 a year. Even if we add in another say $50,000 a year for expansion of such a programme to include the development of pan, then for an investment of $120,000 per community per year, or a grand total of slightly over $2m a year, we can institute programmes which have known benefits for the development of our children, and of our communities, in every constituency.

This is just a drop in the ocean of money that we have reportedly been spending on community development programmes every year, and our landscape is now littered with concrete footpaths as a result. But maybe, just maybe, if we invest in music education programmes we might begin to address the issue of crime at its root by emphasizing the development of our youth and the strengthening of our communities.