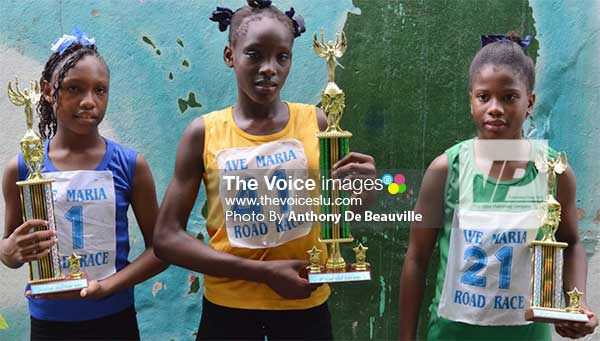 Meanwhile, Shania St. Pierre spoke to the VOICE about her victory. She said, “I am happy that I won this year, I put in a lot of training for the event and the route was similar to last year. I had no difficulties despite being pushed a bit by Merkala along the way”.

She said: “I am dedicating my win my father, Peter St. Pierre (calypsonian De Controller). He was at the finish line last year, but he couldn’t make it this year as he is currently recovering at the Victoria Hospital following surgery last week. He had one of his legs amputated as a result of diabetes”.

In the Infant segment, 1 kilometre which was the fifth edition of this event – Mia Francois (Hennecart House) stamped her dominance on the rest of the field totaling 35 runners; second was Tamika Thomas (Du Boulay House), Tamika was closely followed by Kitana Laurence for third place. It must be noted that no time was taken; the Infant School Road Race is a developmental event that will see the student graduate to the Primary School 3.5 kilometer event in the coming years.

Solange Petit, Physical Education at the Ave Maria Primary School said, “I am pleased with the way things went, the students gave it their all, despite this years’ time being slower than last year. We had 80 students representing the four houses and at the end everyone crossed the finish line”.

She said, in terms of preparation, “The students from the various houses worked hard for this event and rest assured the rivalry between the houses will continue up until January 2017 when the school will be staging its annual sports meet at the Mindoo Phillip Park”.

Solange took a time out to thank the Royal Saint Lucia Police Force for the two outriders, the Saint Lucia Fire Service for the Ambulance and the two medical personne and the many parents who turned out to support the students.