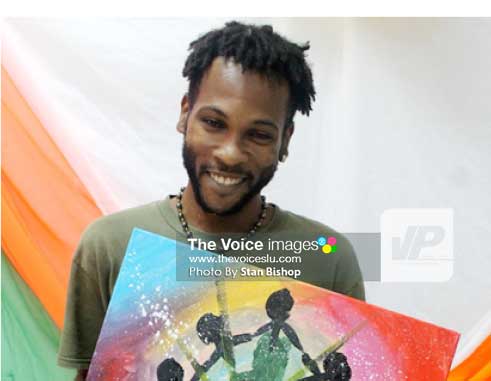 FRENCH painter Edgar Degas famously said that “art is not what you see, but what you make others see.” Twenty-seven-year-old Gros Islet resident, Gilroy Hippolyte, popularly known as “Gilroy H”, intends to do just that.

Hippolyte said he’s been involved in art for as long as he can remember. Art is his life and his life is art, he tells me, adding that he cannot fathom seeing himself doing anything else with as much passion as he brings to his art.

“The story told by my mother is that the moment I began drawing stuff all over her walls at home, she figured that I would eventually end up stuck with art,” Hippolyte said. “But my interest in art really peaked during my years spent at St. Mary’s College, where my art teacher, Ted Sandiford, saw the potential in me and helped me nurture my talent.”

“The second that brush hit the canvas, it was like fireworks and the process just seemed to come naturally to me,” Hippolyte said. “From that moment, my love for art just skyrocketed because I began to realize just how much art truly was a major part of my life.”

On leaving St. Mary’s College, Hippolyte started Artists United in 2011after experiencing how difficult it was to make it as an artist and feeling like the road was a dead-end. In speaking to other artists, he heard the same story: feeling like it was pointless being an artist in Saint Lucia where there seems to be no support for art.

Hippolyte plans to have the group visit schools and other institutions and groups to spread the message of how art can change lives in a positive way despite finding it difficult to make a living from it here even though so much potential exists.

“If you looked at the simplest expressions of art, as basic as cutting hair, for example, there’s an art required to get the job done,” Hippolyte explained. “So why not redirect that kind of energy for the artists towards the youth especially by showing them that there’s so much that the world depends on through art?”

The young artist pointed to the rising level of criminality on the island, saying that art can become the vessel through which people who might otherwise engage in criminal activities use to express their creativity. He said people should be given the chance to contribute positively to society and Artists United stands ready to assist in that regard.

“Aside from being an artist, I try to be an inspiration to people. Whenever people ask me what inspire me, I usually tell them that I trust myself enough to find my own balance. I do so by finding out who I really am and build on that,” Hippolyte said.

One of Hippolyte’s lifelong dreams has been to share his art with the world and allow people to see things the way he see them. His work has been showcased at the National Arts Festival, Headphunk, Saint Lucia Jazz & Arts Festival and other events, giving people a tangible representation of what his eyes see and mind thinks.

Among his influences in the art world, Hippolyte lists Sandiford, Sir Dunstan St. Omer and sons, his father, Felix and mother, Barbara. After leaving St. Mary’s College, he said he found out that he is related to the renowned St. Omer clan.

Hippolyte says he specializes in acrylics for now but has experimented with oils a bit. He’s done sand sculptures, and body art. While art is his life, Hippolyte said it’s not enough for him to make a living off his craft. He said he does art more for the love of it but hopes that as he progresses the offers for pieces will pour in. Currently self-employed, Hippolyte is recovering from an injury he said he sustained at his last place of employment.

Moments before our interview, Hippolyte’s talent as a speed artist shone brightly as he took no more than five minutes to create the painting he displays in the photo that accompanies this article. He said he began developing the skill while at St. Mary’s College whereby he would paint as many as five paintings in one go before the other boys finished one.

Hippolyte is a volunteer of the Commonwealth Youth Peace Ambassadors Network (CYPAN), an organization that provides a platform for young people to raise their voice on issues that foster a spirit of peace. After seeing the painting unfold before their very eyes, the Saint Lucia chapter of the group has decided to make it their official logo.

“I never know what I’m going to paint. I like to see and think of myself as the vessel: the art brings itself to life, I’m simply the one who’s putting it on,” he told me when I asked about his thought process before embarking on a project.

Hippolyte’s advice to young people is simple: that sticking to one’s passions can often end up with our art becoming the heart of us.

“If you have a talent, embrace it. It is a difficult road but as long as you keep that faith and love for your passion, doors will open,” Hippolyte advised.