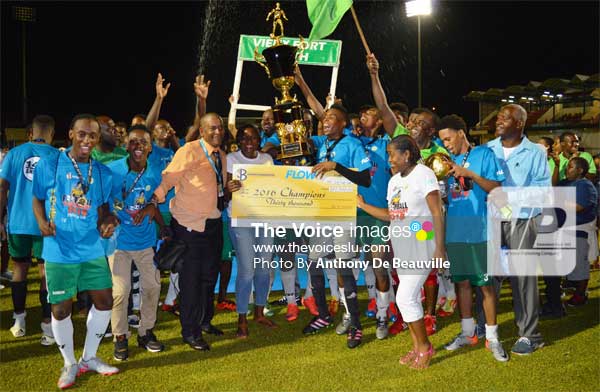 With a crowd estimated to be well over 6500 football fans, Marchand and Vieux Fort South did not disappoint the faithful.

Marchand started off the better of the two teams, mounting attack after attack but not putting away their chances. The Vieux Fort South defense marshalled by captain Jamil Joseph held off the waves of attack and countered as well upfront as the game became end-to-end entertainment midway in the first half.

Vieux Fort South started showing more purpose and intent and in the process broke the deadlock when Antonius Mayers scored in the 41st minute to seize the halftime advantage to the delight of the hundreds of supporters who had travelled from the south to witness the encounter.

On the resumption, knowing what was still at stake between the two first-timers in the finals, both teams tried desperately to score, especially through sleek passing, interchanging and constant breaks down the flanks. But that one goal was all Vieux Fort South needed to seal victory and silence the Marchand posse’s drum beating section.

Marchand, on the other hand, were rewarded with EC$10,000, the Guinness Trophy and silver medals for their efforts. Lincoln Phillip from the Marchand team also finished as the tournament’s leading goal scorer with four goals.

The 2013 Champions Gros Islet finished in third place and claimed EC$5000, a trophy and bronze medals after defeating Canaries 1-0, a goal scored by Elijah Louis.

For their fourth place finish, Canaries took home a trophy and EC$2000.

Meanwhile, the monetary prizes and other major individual awards from the tournament will be presented at the official prize giving ceremony to be held this Saturday from 7:00 p.m. at a venue to be announced by the organizers.