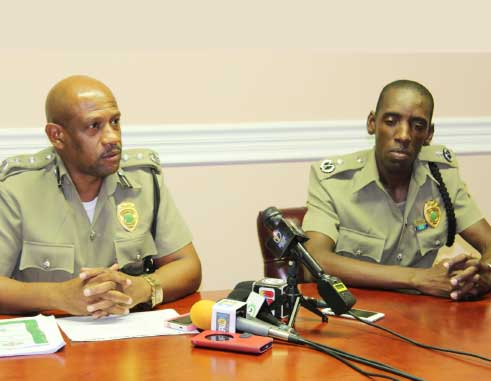 Bordelais Is Under Scrutiny.

HOW secure is the country’s prison and how effective is its rehabilitation programme are questions that many people are asking following the daring daylight escape of 33-year-old Hanson “Dirty White” James on Tuesday.

James is presently back behind bars, captured under a house in Morne Panache, Dennery, 28 hours after fleeing the prison by jumping over its inner and outer fences, the tops of which are crowned with barb and razor sharp wires.

James, after his daring jumps over the fences, made his dash to freedom through the heavily snake-infested, dense undergrowth bordering the prison.

His dash was short-lived, thanks to residents of the Dennery area who revealed sightings of him to the command post at the Bordelais Correctional Facility (BCF). That information was transmitted to the four search teams scouring the island for James.

“We have a very secure facility but in every facility you do have breaches,” Chris Felix, Assistant Director of Operations at the prison, said on Thursday during a press conference.

At the time of his escape, James was under maximum security and part of a maximum security cleaning service. He capitalized on an opportunity and scaled the fences, clearing them without a scratch, according to reports from the BCF.

James, it was told, took his flight to freedom while under the watchful eye of a BCF guard.

“He was in the company of an officer at the time,” Deputy Director of BCF, Leonard Terrance, said.

Terrance noted that security procedures are followed and care is taken to ensure that the fences surrounding the building housing the prisoners are properly secured.

But a convict escaping from maximum security prison always forces prison authorities to take another look at their security measures as was the case with the BCF hierarchy.

“It causes us to review our security systems to see how we can do a better job,” Terrance said. “But like with everything else, I do not know of any prison where 90 percent of those guys do not think of escaping or wishing they had some level of freedom.”

Terrance lamented the lack of an aggressive rehabilitation programme at the prison, noting that it did not reflect what it claimed to be – a correctional facility equipped with certain programmes.

“To be honest, for years there have been several attempts to have it (BCF) live up to that mandate,” he said.

From Terrance’s standpoint, it seems that the only department at the prison offering a chance at rehabilitation is the education department which, he said, is the most successful. Two years ago, that department recorded a 100 percentage pass rate in the Caribbean Proficiency Examinations usually taken by form five secondary school students. This year, the pass rate was 87 percent.

Admitting that sports can play a part in the rehabilitation process, the institution’s deputy director is more interested in the programmes offered at the facility being fully operational.

An investigation has since been launched to determine a number of factors regarding James’s escape, including whether or not he was harboured at any time by person/s during his brief stay outside prison walls. He will also be charged with escaping lawful custody.