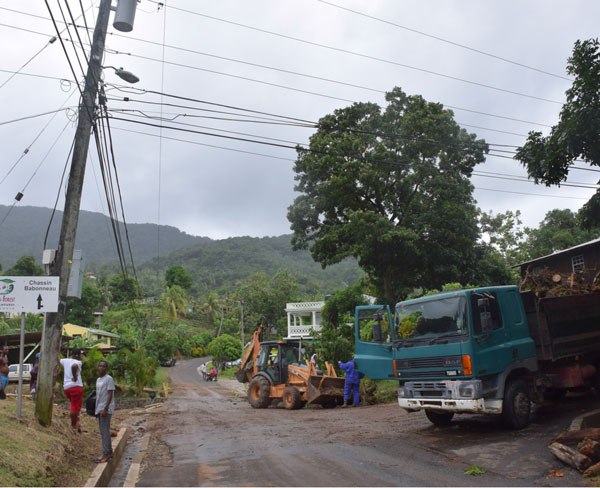 “The next 72 hours are crucial and we have to make sure (that) we are all on the same page in terms of the priority areas,” Chastanet said on Thursday.

Chastanet’s statement came just hours after his return to Saint Lucia earlier that day when he was briefed immediately by NEMO officials on the emergency response plans as well as a preliminary damage assessment.

He applauded Minister for Empowerment, Lenard “Spider” Montoute, and National Emergency Management Organization (NEMO) officials for taking the decision to suspend classes at schools during the inclement weather.

“These were good decisions that helped make sure that no lives were lost and it helped people to secure their homes,” Chastanet said.

Chastanet said he was “very satisfied” with the manner in which emergency officials handled matters during the passage of Tropical Storm Matthew which swept through the island with heavy downpours and high winds. Nevertheless, he noted that NEMO has been asked to prepare a report pinpointing shortcomings which can be eliminated in the future.

According to the Prime Minister, preliminary findings indicate that an estimated 85% of the agricultural sector was damaged by the storm’s passage. However, Chastanet has reassured farmers that government remains committed to reinvesting in the island’s agricultural sector.

“I want to reassure the farmers that we will be reinvesting in the sector,” Chastanet said. “We want to get this sector going as soon as possible.”

Chastanet said his trip to Morocco in August proved beneficial as Government was able to secure extra fertilizer for farmers, with shipments already on the way to Saint Lucia and more expected in the future.

Nevertheless, the Prime Minister said more emphasis needs to be placed on putting measures in place to mitigate the damage caused to the agriculture sector whenever similar weather systems affect the island.

“We need to keep strengthening our efforts and recognize that this is going to happen more frequently,” Chastanet said. “When it comes to agriculture, we have to build a sector which is a bit more resilient to natural occurrences.”

Many people reported roof and water damage to their homes which resulted in damage and loss of personal belongings. In some cases, houses were partially damaged, some of them collapsing while others had their roofs blown off by the gusty winds.

Many trees either snapped or were uprooted during the storm, some of them falling on power lines.

Chastanet lauded the quick recovery efforts that resulted in the clearing of roads and reopening of airports, restoration of electricity and other utilities, and the roles played by the Special Services Unit (SSU), emergency and government officials and other Saint Lucians during and after the storm.

The Prime Minister also met with Cabinet members, Leader of the Opposition, Philip J. Pierre, Permanent Secretaries from some ministries and representatives from WASCO, LUCELEC and NEMO for an in-depth analysis and presentation related to the storm.

Meanwhile, schools remained closed yesterday with classes set to resume on Tuesday due to Monday being a public holiday.