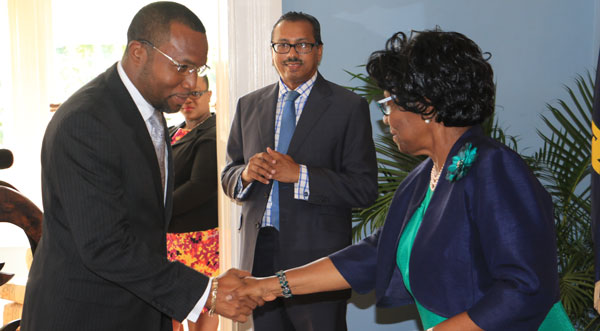 Saint Lucia has a new Attorney General and he is ready to get to work on improving the productivity of the various departments which fall under his purview, as well as creating better synergy with other government departments and organizations.

Stephen Julien, a former magistrate, was officially presented to the nation by Governor General Dame Calliopa Pearlette Louisy after he took the Oath of Office and Allegiance at Government House on Thursday.

Mr. Julien, accompanied by his wife, Sherry Ann Julien, and his two sons, had the support of the Cabinet of Ministers and Prime Minister Allen Chastanet as he laid out his plans for the Office of the Attorney General.

“I am deeply honoured to have been chosen to serve as Attorney General at this juncture in our country’s history,” said Mr. Julien. “During my tenure, I will have oversight for the services provided by various sections or departments which have the responsibility for providing services, such as the general administration of the Attorney General’s Chambers, advice and litigation on civil matters to central government, legislative drafting and the Registry of Companies and Intellectual Property. My first order of business will be to meaningfully engage these departments with a view to assessing their particular needs.”

One of the first issues the Attorney General wanted to address was staffing of the office and he made an urgent appeal to the government.

“I have been reliably informed that understaffing remains a recurring issue for some departments but this is especially so where Crown Counsels are concerned and this has had a negative impact on their overall productivity,” the new Attorney general explained. “One can imagine that without this source of support and that human resource that the courts and government can significantly slow down to our detriment. It is for this reason I will depart from the usual protocol of these proceedings and use this forum to make a special plea to our Honourable Prime Minister for the allocation of these and other resources for the aforementioned departments which collectively form the Attorney General’s Chambers as we all agree that the functions which we perform are essential to the government. Another feature of my tenure will be the encouragement of greater synergy with the other departments of government, organizations and special interest groups.”

Julien thanked the Governor General for hosting the swearing-in ceremony and also thanked the Prime Minister and government for allowing him to serve within the Cabinet. The new Attorney General was especially thankful to his wife and family and friends for their support.

For his part, Prime Minister Allen Chastanet said that the government recognized that several essential government departments have been understaffed, zeroing in on the Attorney General’s and the Office of the DPP.

“Clearly, there is a need to hire additional lawyers and administrative staff in those departments,” PM Chastanet told the audience. “If we are to ensure transparency and good governance and if we are to be a viable destination for investment, the rule of law is critical. It must be perceived by all and sundry that the government and the people of this country hold this in the highest esteem. It is the intention of this government, as difficult as it is going to be in the coming months and years, to find the resources to make this happen. I give you the assurance, I give Her Excellency the assurance and I give the people of this great country the assurance that we will find the resources to ensure that we deliver.”

Prime Minister Chastanet thanked Mr. Julien for accepting the position of AG and also expressed thanks to Julien’s wife and family for their “understanding and support” for the hard work that lies ahead.

Julien was called to the bar in Saint Lucia in 1998 and holds a Legal Education Certificate from the Sir Hugh Wooding Law School and is the holder of a Bachelor of Laws from the University of the West Indies. He has also previously served as Consul General to Saint Lucia in Toronto, Canada.