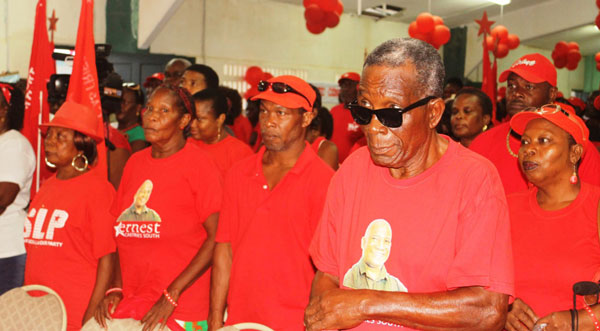 Sponsored
Share this post:
POLITICAL Leader of the Saint Lucia Labour Party (SLP), Philip J. Pierre, told scores of party delegates last Sunday that the party remains committed to governing the country despite its defeat at the June 6 polls.

“We have lost a battle but not the war…I guarantee you: Labour will return stronger than ever. Let us continue our work. Let us organize, mobilize and consolidate for our victory, for the victory of all of our people and country,” Pierre, who will go unopposed for the party’s leadership, said.

Pierre was at the time delivering his maiden address to the party faithful at the open session of the party’s Conference of Delegates held at Belle Vue Combined School in Vieux Fort. It was one of the party’s first few major gatherings in the past four months and was held under the theme, “Mobilize! Organize! Consolidate!”

Pierre said the previous SLP administration managed the economy well by taking tough decisions and that the party is ready to continue working in the interest of Saint Lucians.

While admitting that the SLP intends to “undertake serious introspection” to ascertain the party’s loss at the June 6 polls, Pierre said the current administration “appears to be clueless and has embarked upon a campaign of victimization and blaming”.

“Our country is once more in the hands of a government that has no shame in victimizing those who they perceive to be against them,” Pierre told the gathering. “A government of excuses, a government of blame.”

Pierre became Party Leader and Leader of the Opposition following former Prime Minister Dr. Kenny Anthony’s pronouncements immediately after the elections results that he would no longer serve in those capacities.

Pierre said the party’s way forward include remaining focused on the conference theme of organizing, mobilizing and consolidating. To that end, the party, he said, must organize and re-energize its constituency groups and branches and increase its membership.

“Politics is about people,” Pierre said. “We cannot win without people. Improving people – that is why we are in politics. We have to convince people to join our party to get involved. Our party must attract the right people. However, they will not join unless we can offer them an alternative.”

Party Chairman, Claudius Francis, set the tone earlier in the day, noting that despite “all of the good governance” and social programmes the previous government provided, “we were let down just across the finish line.”

Nevertheless, Francis said the party must not be afraid to take hard decisions, including allowing for some introspection to correct what went wrong that resulted in the SLP losing by 6-11seats despite an intense and costly election campaign.

“In that correction, if it is that it was the Political Leader and the executive which faltered, then we must take the blame,” Francis said. “We cannot pass the buck. Wherever it is that the blame lies (and) whoever is responsible, we must take the corrective measures. That is what today marks for us: the new beginning, the continuation of what was there.”

Francis also accused the current administration of victimizing people they deem to be Labour Party supporters.

“The people of Saint Lucia are now feeling the wrath of the most vindictive government in the history of Saint Lucia. The governments of the United Workers Party have always been vindictive. But there has never been a government that has thrown out the subtlety and has been as vindictive as openly as the Allen Chastanet government,” Francis explained.

Former Deputy Speaker of the St. Vincent and the Grenadines Parliament and Unity Labour Party (ULP) , Rochelle Forde-Duncan, delivered the feature address, telling delegates that the SLP was “off to a fantastic start” by choosing the convention’s theme. However, she urged them to ensure that the essential leg work is done to meet the objectives of the party.

“The mobilization has to continue at the individual constituency level. We tend to wait until we are in the third or fourth year of a term before we start to engage in active mobilization effort. This we cannot afford to do,” Forde-Duncan said.

Forde-Duncan threw a few verbal jabs at Prime Minister Allen Chastanet, including criticizing what she deemed was his ‘dismal’ response during the recent passage of Tropical Storm Matthew last week.

The Vincentian politician also berated Chastanet for his utterances on the limited computers and vehicles the Royal Saint Lucia Police Force is forced to work with as well as government’s delay in delivering on its “Five to stay alive” plan. Forde-Duncan also chided Chastanet for his blunders in Parliament when he attempted to introduce a bill to the House.

“In order to get rid of that type of governance, we have to mobilize, feel energized, refresh our party and get ready. A mobilized SLP without an organized approach will not result in success. The strategy for the next elections has to be one of a great and sophisticated plan crafted from the centre and filtered down to the constituency level,” Forde-Duncan said.

While most of the SLP’s MPs and caretaker candidates were in attendance at Sunday’s conference, Vieux Fort South MP and former Political Leader, Dr. Kenny Anthony, was absent. However, Party Chairman, Claudius Francis, announced that Dr. Anthony was unable to attend the proceedings since he has recently undergone a medical procedure.