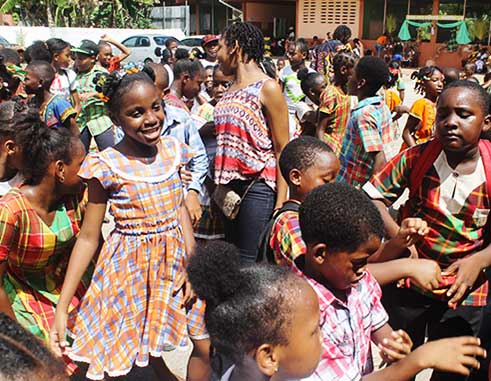 EXPRESSIONS of cultural pride will dominate this weekend as Saint Lucians observe JounenKwéyòl, the flagship activity of Creole Heritage Month.

Jounen Kwéyòl will be held in four communities tomorrow, namely Jacmel, Choiseul, Gros Islet and Belle Vue (Vieux Fort), with the communities highlighting traditional pastimes that have contributed to their social fabric. However, other events are being hosted in various communities today.

For the past week, the momentum for the much-anticipated event has been growing. For instance, many schools and business places hosted creole-themed events to celebrate the island’s rich cultural heritage, with specially-prepared creole dishes, playing of folk music and wearing of traditional clothes being the highlight.

Since its initial hosting in 1984, JounenKwéyòl activities have been organised in several communities around Saint Lucia, which has served to highlight those communities’ contributions. However, the event was cancelled in 2010 following the passage of Hurricane Tomas which battered the island just days before the event was to be hosted. Since then, however, the event has continued to be a favourite on Saint Lucia’s cultural calendar.

“I am very pleased with the great sense of cultural expression and diversity which comes to life at this time,” Chastanet said on Friday. “I hope we all immerse ourselves and derive a deeper grasp of our identity as Saint Lucians. Let us do so in a safe, peaceful and responsible manner as we take part in the main celebrations for Creole Heritage Month.”