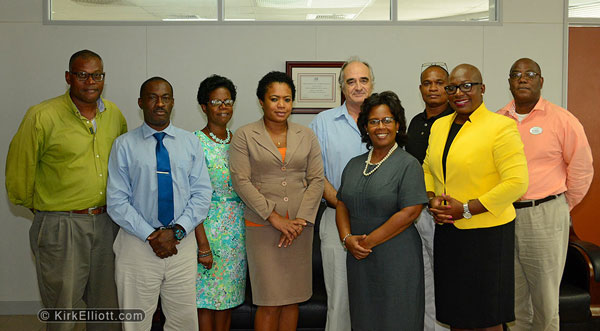 This was HiAC’s first meeting with the Minister since the United Workers’ Party assumed office in June.

The meeting was convened to officially introduce Minister Rigobert to HiAC and its work to date. The meeting also served as an opportunity for the Minister to share her views on HiAC’s work of advising the Ministry’s Technical Vocational Education Training (TVET) division in an attempt to help local schools produce students who are better equipped to join the hospitality workforce.

The HiAC is tasked with assisting the Ministry of Education with updating Saint Lucia’s schools’ curriculum so that students graduating from secondary and tertiary institutions are better equipped for work in the hospitality industry.

“I am elated to meet with this committee and concur that there is important work to be done,” said Dr. Rigobert in welcoming HiAC’s members. “With your enthusiasm, I am confident that improvements to our education system can be obtained. We will learn from the successes in TVET and apply a similar model to other areas of endeavour which also require attention.”

President of HiAC, Joseph (Joe) Dubois, expressed gratitude on behalf of his committee for the Minister’s keen interest in the committee’s work. Dubois highlighted the successes as well as the challenges the committee has encountered to date.

“Madam Minister, the government’s Statistical Department has been extremely helpful in availing HiAC with workforce-related data and Mr. Edwin St Catherine, the government’s Chief Statistician, has been exemplary in his assistance,” Dubois explained. “However, in other areas, acquiring data has been a huge challenge which compromises HiAC’s ability to deliver meaningful advice that is guided by data.”

Dubois continued: “There is a significant gap between the labour force and the market and HiAC would be grateful for government’s support in encouraging hospitality industry titans to assist and facilitate the committee as their work stands to benefit all hospitality industry partners, from street vendors to big resorts.”

With tourism as the primary driver of our economy today, it is imperative that we develop a cadre of hospitality employees that are second to none in the execution of excellence in the workplace. However, world-class employees are just one aspect of the equation and entrepreneurship is another important area for growth and development that must be nurtured, encouraged and promoted.

The HiAC plans to take these very important messages to the airways with a series of both radio and television appearances in the near future as part of its quest to both sensitize as well as engage the public in the all-important discussions on truly growing our economy.