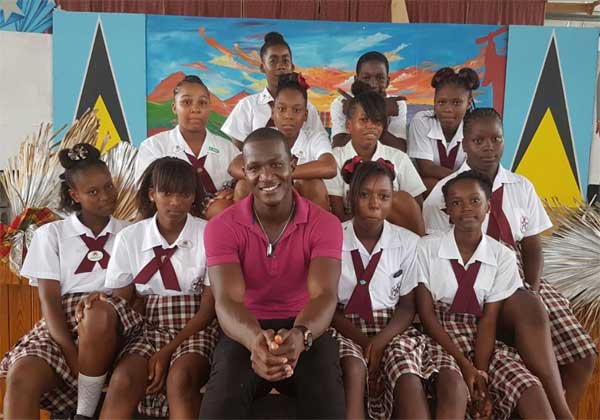 THE Daren Sammy Foundation which officially launched with a grand, black-tie, fundraising Gala on August 10, is well on its way to fulfilling one of its major objectives: empowering the youth. Often dubbed, the Inspirational Leader, Sammy and his team began the first leg of the DSF School Tour on Monday .

“What do you want to achieve?” Sammy asked the student body of the Gros Islet Secondary School, “What I found out is that, in achieving your goals you must know how to set them,” he continued, before relaying his 5 Step Plan to goal setting.

Sammy further imparted, to the appreciative audience, what inspired him to become the first St Lucian to make the male West Indies Cricket team, and to conclude, he gifted official Daren Sammy Foundation Items to deserving ‘Champions of Gros Islet Secondary School’.

The Daren Sammy Foundation hopes that the planned school tour leaves a positive mark on students by giving them the motivation to excel not just at school but in life with sheer determination. By stressing on the importance of setting goals, planning how to achieve them, and by using his own success as an example, Sammy hopes that this is the start of a big shift in the attitude of the youth to their future.

The DSF School Tour will progress to the Monchy Combined and Gros Islet Primary School, and will then resume after Sammy returns from Bangladesh and Pakistan.

The Daren Sammy Foundation has also to announced that there will be live viewing of a short but enlightening video which speaks a bit about Sammy, via its Official Facebook page tomorrow from 9:00 p.m.; a LIVE Chat will also follow.