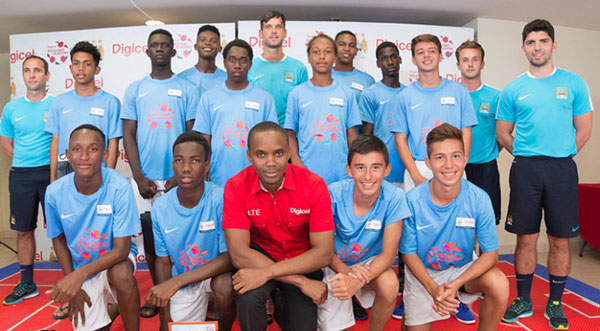 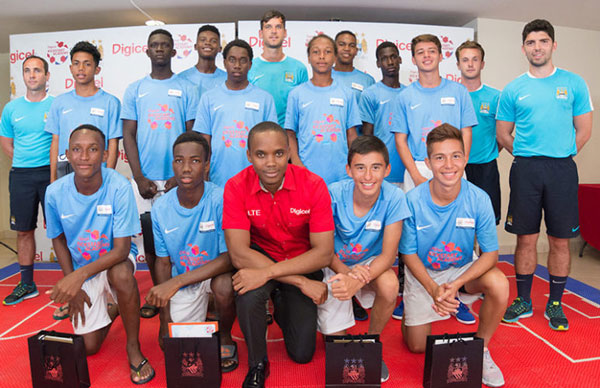 (Thursday, October 20, 2016 – Castries, St. Lucia): The Digicel Kickstart programme is giving 12 young aspiring footballers an opportunity of a lifetime: to visit Manchester City to train with and learn from some of the best coaches in the world.

The twelve were handpicked from a total of 420 boys who participated in the Kickstart Programme which hosted fourteen clinics across the Caribbean and Central America, followed by the Academy in Jamaica in June.

The Manchester City experience the twelve boys are embarking on is a bespoke training programme delivered by City Football Schools at the City Football Academy, Manchester City’s elite training and youth development facility. Throughout the week, they will have the opportunity to train like a professional footballer and to learn how to improve their skills on and off the pitch.

In advance of the upcoming visit, Alan Dixon, City Football Schools Project Manager, who led the coaching team for the Kickstart Clinics and Academy, said: “Everyone at Manchester City is looking forward to welcoming the boys to the City Football Academy. During the clinics and the Academy, they all demonstrated a great work ethic and their skills improved greatly as a result of their hard work and commitment. Initiatives like Digicel’s Kickstart programme are important for young players who want to improve their game and we are delighted to support it. We encourage the boys coming to Manchester to keep working hard to ensure they can make the most of this experience.”

According to Peter Lloyd, Director of Marketing for Digicel Group, “It’s been very encouraging to watch the boys’ growth over the past few months and to hear the great feedback from the coaches. They’ve all worked very hard and I implore them to soak up as much as they can from this once-in-a-lifetime opportunity.”

Lloyd continued: “Our partnership with Manchester City continues to go from strength to strength and it shows in the number of participants and the overall engagement numbers which have grown by over 40% across our social media platforms compared to last year.”

The six boys who took part in last year’s programme, also visited the Etihad Stadium to watch Manchester City battle against Everton, which finished in a 0-0 stalemate. This year, the selected players will get to see the likes of Kevin De Bruyne, Raheem Sterling and Sergio Aguero in action against Southampton FC.

The Digicel Kickstart programme provides an avenue for young footballers to improve their talents and skills, but what is truly remarkable about the programme is its emphasis on character building for growth and maturity in all facets of life.

The entire Manchester City Experience will be captured by and shared through 30-minute programmes on SportsMax. Other highlights from the experience will be shared via Digicel’s social media platforms in the form of live updates and 15-second to one-minute clips.