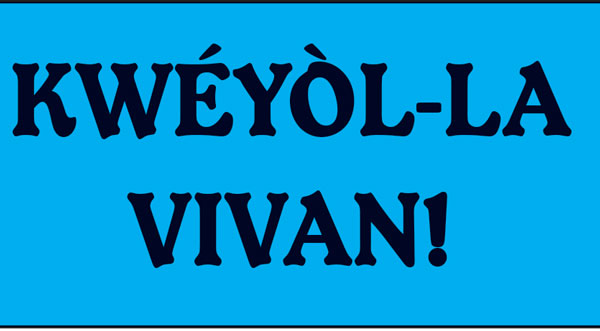 THE mere fact that we have to ask the question, ‘why write Creole?’ is indicative of a cancerous underlying negative attitude towards our indigenous tongue. No one feels the need to ask ‘why write French?’ or ‘why write English?’ But, for Creole speaking peoples, the question reflects that, for historical reasons, our Creole language has suffered from the inflationary effects of never having had the status of being perceived as a valid language. It has been outcast, referred to as bad, or as a bastardization of the French language, not a ‘proper’ language.

If the question, ‘why write, in the first place?’ or ‘why write at all?’ were raised, it would, nevertheless be a legitimate question. To answer the question “why write Creole?’ we must first seek out some answers to the more general question, why write?

Writing is an important record keeping tool. We can keep accounts of historical events that can be passed to the generations after us. We are able to learn more about, say, the slave trade, because someone took the time to write about it.

Writing allows us to communicate with people without our having to be physically present. We can post a letter to a friend or relative overseas. We do not have to talk and listen in order to communicate with someone with ink and paper. So, writing bridges geographical distance. It allows an additional tool for communication other than word of mouth.

Writing, whatever the language, is an important communication tool. It is an instrument. There are several reasons why people who speak Creole should write Creole. In the Caribbean, where there are several islands where Creole is the indigenous language, it would mean the creole language, as well as other languages, can be utilized as a link for communication. Similarly, developing the writing of Creole would mean that the Creole language would now have available to it, both the tools of speech and writing, not, as has been traditionally the case, only speech.

For people who speak Creole and English and cannot write English, writing Creole would mean that they no longer have to depend upon someone else to read and answer their personal letters for them. This would mean a greater self-sufficiency and in many cases, a lessening of the humiliation of not being able to read and write.

All the research on literacy agrees that the entry point for teaching literacy is with the spoken language. In other words, the mastery of the spoken language aids in the acquisition of reading skills, and therefore, writing skills. Thus, it is easier to learn to read and write in the language you already speak, your native or mother tongue. Although it is possible to learn to read and write in a language that is not your own, it is more difficult because you would not be able to make use of your natural language as a guide to learning. In fact, international meetings, for example, UNESCO recommend that initial literacy should commence in one’s mother tongue. Historically, native Creole speakers have been educated (in Saint Lucia) in English. Thus, we are learning to read and write English in the most difficult way possible, as a second language. We speak both Creole and English, but we only write English. It is necessary and desirable that we read and write English. It is equally necessary and desirable that we learn to read and write Creole.

Even if learning to read and write Creole could not assist in literacy training, there is another fundamental reason why we should write the language we speak: Because it is ours. It is our language. It is a mark of our negritude and of our common historical experiences. It is the language of an enslaved people. It shows that we are Africans. Creole languages all have African syntactic structures. The Creole language is a part of our culture that slavery and our deportment to other sections of the world could not strip us of. It is our national heritage. We should be proud of our National heritage.