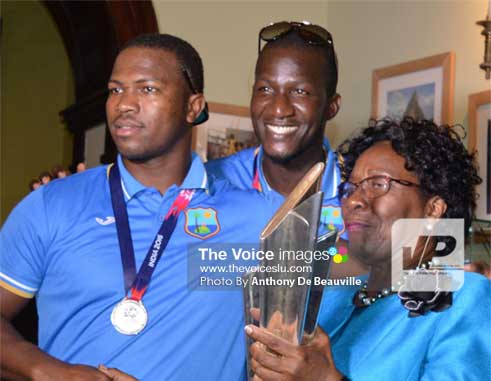 ST. LUCIA is a country where sports has always been encouraged but not enough. Some may argue that point but that is the reality. There have been several discussions and debates on the talent found in St. Lucian youth especially those who represent the country in national and international sports events.

St. Lucia stands at a very low position overall in to sports. For a Third World country that depends heavily on outside assistance, and if you asked me for a ranking of our performance on a scale of 1-10, I will give it a 4.

Following Levern Spencer’s performance at the Summer Olympic Games in Rio, many St. Lucians went on the loose on social media as they washed their tongues on her performance. Like any other right-thinking person, I realised she didn’t medal. Like any other, I saw the performance. It was just one of those days. Does that make her less of a St. Lucian? Less of a world-ranked high jumper? Less than being our most decorated athlete?

She is all we have. Where were those who criticized her for just walking underneath the bar on Saturday August 20 when she needed help to carry on in her preferred sport in years gone by? Where were they? How many know of her struggles? How many know that she was criticized by the same people she represents? She has been put down and torn apart by members of the local federation she represents. Oh!!! You didn’t know! Well, God and family are her strength.

If we came together as a nation in a similar manner when this country we call home gets affected during a natural disaster, we can also become the No. 1 sporting nation in the sub-region and, by extension, the world.

We can roll back the years and see how many Olympians we have had from Atlanta 1996 to Rio 2016. We have had athletes who did not finish their event. We also had athletes who did not make it to the second round of competition. And yes, Levern did make the final; we should be proud of her just making it to the finals. In Beijing she placed 27th, in London 19th and in Rio 6th. What more can we ask for from a woman who has served us with distinction?

As a nation, we must surpass the hurdles of corruption, and other social evils to get world-class sporting facilities. It’s time to give back the George Odlum Stadium and excellent sports coaching for training so our sportsmen and sportswomen can be world champions, too. We must use every penny allotted by the government past and present and the private sector for the sake of sports development. We must stop the talking and put the pennies to work..

This not only enhances our country’s sporting field but also enables our young men and women to pursue their passions with more encouragement. We must as a nation salute our world-ranked champions Spencer, Sammy and Charles for their ability to influence such huge masses of young people.

It would be a shame if more people do not choose sports as their career / goal. We must encourage students in schools not only to keep keen concentration in studying but also in building their physical strength.

This naturally comes by playing a variety of sports which school children have a lot of exposure to. We need longer durations of sports / games periods in schools so as to refresh the young minds from the stress from the classes for Information Technology and other competitive exams during their school days. Please let them have a future and make children physically and mentally sound. They’ll be grateful to the school management and also the country for giving them opportunities to excel in the same manner Spencer, and others did during their tender age.