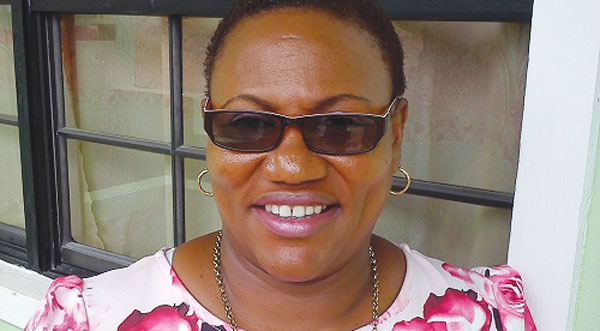 WHEN you hear of regular persons starting up small business ventures, automatically you imagine them going into the hair or nail business, opening a small clothes and shoe shop/stall or going into the food business.

But today’s FITC stepped away from the norm six years ago and after tapping into the skills and lessons of the aged, she has made herself a household name with her homemade organic pain ointment, or as we say in St. Lucia “fixion” called Frances Rub.

Frances Severin of La Guerre, Babonneau is well known for having a big and soft heart. She said she hates hearing people cry and especially when they don’t have the basics in life. She said: “I will never see that I have and I don’t give when people need”

Frances Rub is good for everything from asthma, rheumatism, carbuncles and even haemorrhoids. It was used by people who had the ZIKA or Chikungunya and has been receiving rave reviews.

The VOICE: Tell me your story.
Frances: What I really wanted to do was nursing but that wasn’t to be. The Lord knows that nursing was what I wanted to do and look at what I’m doing…medicine. I feel proud of myself for bringing this out. I started doing that rub because of my grandson who had a very bad cold and since I was used to making the “fixion”…it wasn’t Frances Rub yet, I made some and I rubbed him and he got better. From there, my daughter had a friend who wanted some and my daughter gave her from what she had. Then that friend said she wanted some to take to Canada so I made some for her and she said it worked very well. Anyway, I had some left over so I took it to the streets to sell and the word started to spread because people were saying that it was working so well.
The first place that bought my product to sell was The Morne Bakery and then I brought it over to M&C. There was a young lady working there who had a bad leg, she used the rub and said it worked wonderfully for her. So as she had used it, I went to the company’s supervisor to ask if they were interested in selling it and she said to me that I should go over the Bureau of Standards to get the product labelled as that was mandatory to be allowed on the store’s shelves. I did what she asked me to do and I got through with everything.

The VOICE: What process did you have to go through to get this product off the ground?
Frances: I had so many challenges. I started very small and I never had any loans or anything like that. Getting the product through the market was the biggest challenge because getting a product out there cannot be done just like that. I had to go through all different ministries like the Bureau of Standards, TEPA and the Ministry of Commerce. I had to attend workshops with all these people, who in turn gave me advice on how to handle and sell my product and business. That was very good because without them, I would not have what I do now. I’m on Twitter, Facebook and everything. I also have my son-in-law and my husband who both help and push me…they’re doing great things. Right now, I’m able to order my bottles from overseas but I still have my proper packaging and I’m ever ready for shipping the product out of St. Lucia. Frances Rub has lifted me up..

The VOICE: What do you put in there?
Frances: When I started doing the Frances rub, I had some ingredients but afterwards I started getting product ideas in dreams. I still get those dreams but right now, the product has 50 ingredients and I think that is enough. Some of these ingredients are red and white lavender, eucalyptus oil, castor oil, coconut oil and lard to name just a few.

The VOICE: In this day and age, there are many people who either don’t know about or they don’t believe in the power of a good fixion. How do you think you could convince these people that your product is the real deal?
Frances: Yes I know a lot of people don’t want to use fixion because they believe that it smells, but it doesn’t because I buy products to cut the smell of the lard and the soft candle. Right now, that’s what I have on my skin…I use it as my cream, I don’t put anything else on my skin and no one can smell it. I’m advising people to use the Frances Rub because it’s good for all aches and pains. If you continue using it, you will see the difference. You can use it on the children when they have colds and even when ladies have their period pains, they can rub their bellies. It doesn’t take long for the pain to stop and I get a lot of good reviews about it. People are talking about it. A man all the way in the States sent me a message telling me that his parents bought him a small jar but he didn’t know how good it was and he regrets not buying a big jar. He is now asking me to post him one and I’m going to be doing that any day now.

The VOICE: This business venture is very uncommon. How did you know that this idea was going to thrive?
Frances: My dream showed me that I would survive. My mom did that for us when we were small. My mother used to put it on our skin. I thought, if my mom was using that for us at the time and I tried it for my grandson and it worked, plus other people used it and it worked, then I should go in and I wasn’t scared. Then I got the vision and it worked then and is still working. I feel proud of it. Very soon I will be hearing from St. Vincent and Barbados who want the product. Trinidad and Martinique are next then it’s the rest of the Caribbean. But all the time, I’m the one pushing myself to see my product go out there. It’s the Lord and myself and I’m working hard to see it go out of St. Lucia.

The VOICE: You are a very charitable person. Tell me about the way you give back.
Frances: I do my product and I give a supply to all the elderly homes every Easter and Christmas. I package the jars, I bring them to the homes so that they can use it on the elderly people because they are the ones who created this product originally. You cannot leave them behind, you must always put them ahead and show them that this product that they knew in their younger days is back. Now last month I kept a promise that I made to my husband. I always said that if I was to ever come into some money, I would make a donation. I won some money and I told my husband, the Lord did what I asked him for so I have to give some of what I won. So I prepared full hampers and gave them to all the homes. I also promised to make a donation to the young man who manages the Feed The Poor Ministry and so this week, I will be donating a box of chicken so that he could use it towards his feeding programme.

The VOICE: This is a question that I usually ask individuals who have started their own businesses from scratch. What would you like to say to the people out there who are unemployed and just can’t seem to land a good job to sustain themselves?
Frances: To me, there is enough to do in St. Lucia. God didn’t create everyone to have a regular job or even an education. We can use our movements and talents…our hands and there are so many products that we can sell. There are young guys and women who don’t necessarily have to go out to sit in an office, you could take a banana leaf and make cards, you could take breadfruits to make pies and you can use plantains to do all sorts to sell. The government cannot give everyone a job, we have to get up and do something. You cannot just sit around and say there are no jobs, you need to get up and do something to earn a dollar.