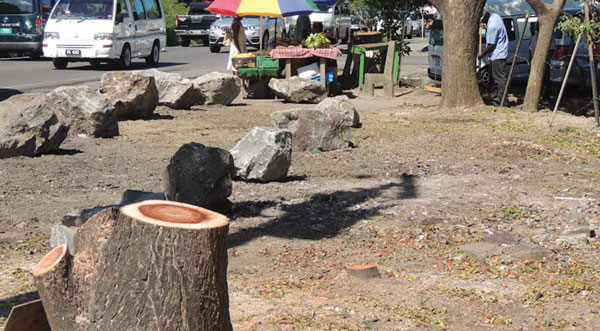 I was taking my usual trip to the supermarket last Saturday morning when a drastic change in the landscape opposite the Bay Gardens Hotel jolted me. As a drove closer, I realized one of the trees where the coconut vendors ply their trade had been cut and boulders placed along the roadside.

I was struck by a feeling of bewilderment and dismay as I drove past the newly disfigured landscape. I had that same feeling earlier this year when all but one of the trees in front of the Providence Commercial Centre were cut overnight. I couldn’t fathom what would cause the owners of the building to take such a drastic move with no regard for the effects on the environment and the aesthetic look of that section of the highway. There is no more shade in the car park outside that building, tenants and customers have to contend with the heat every day, unlike before the trees were chopped down to their trunks and uprooted to ensure they have no chance of growing new branches or surviving. My enquiries would later reveal that the trees were cut because a guest from the hotel was mugged in front of the building one evening. So a guest gets mugged and it’s because of the trees! And the solution is to cut the trees. What about improving the lighting in the area? What about posting a security guard outside the building?

Incidentally, the Providence Commercial Centre and Bay Gardens Hotel are owned by the same family.

Back to the latest defacing job. As I drove further up, I realized the coconut vendors had moved. Determined to continue to ply their trade, the coconut vendors moved further up the highway, between the Indies Night Club and the newly rebranded Massy Rodney Heights Supermarket. What this has done however, is to create an eyesore along that section of the highway, similar to when the mobile canteens were strewn along the highway opposite the entrance to the Rodney Bay Marina.

That’s what happens when you try to squeeze people out of making a living. They will find some alternative, some way out. I spoke to a couple of the coconut vendors who told me they came to do business as usual on Saturday morning only to find two rows of boulders placed parallel to the highway and the tree cut down to its trunk. The coconut vendors say they had gotten veiled threats from persons at Bay Gardens, but never expected such drastic action.

The coconut vendors are industrious. They provide a service. They are entrepreneurs. They have taken to bottling and chilling the coconut water for sale and for consumption by locals and visitors alike. I have seen government ministers, lawyers, doctors, police officers, and other persons of influence and stature, patronizing the coconut vendors. Some of the coconut vendors travel from as far as Dennery to Rodney Bay on a daily basis, to ply their trade. They are fathers. They have wives, girlfriends, and children who depend on the money they earn from the sale of coconuts, for food, for school books and uniforms, and other basic necessities of life. Squeezing them out of business is not the answer.

While taking some photos of the newly defaced landscape, I encountered a taxi driver outside the hotel, who was displeased with me asking whether the roadside was owned by Bay Gardens. He told a staffer don’t answer me, and had several reasons why I should know better. Within seconds, a tall spectacled lady approached me. She identified herself as Matilda – the Landscaping Manager at Bay Gardens.

I asked her what was the rationale for cutting the tree and placing boulders along the highway. She said the coconut vendors had become a nuisance, that Bay Gardens guests could stay in the hotel lobby and see the coconut vendors urinating near the ficus hedge. She also claimed they would sometimes leave the coconut husks near the roadside overnight, making the place untidy. I asked whether that was sufficient justification to displace the coconut vendors. She responded by telling me: “Tourism is all we have, we have nothing else.” She tried to convince me that her landscaping job would make up for cutting down the tree that had for decades stood majestic along the highway, providing shade, holding the soil together, serving as a wind-breaker during storms and hurricanes, and providing the very oxygen that we breathe to stay alive.

Then I pointed out that what they had done is to create a hazard, because if a vehicle headed north has to veer off the road to avoid an accident, that vehicle would now run into the boulders which have been placed along that section of the highway. Her answer: “What about the pole…if the boulders were not there, they could run into the pole.”

I found her reasoning incredulous! Finally, I asked Ms. Matilda, whether she had gotten permission from Planning to place those boulders along the highway. She answered: “You think am a crazy woman?” 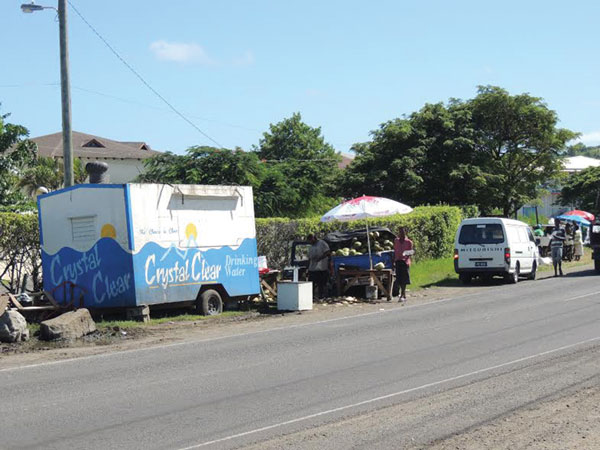 Then she stormed off, saying: “You wasting my time.”

A call to the Development Control Authority (DCA) revealed that they were unaware of the recent development along that section of the Highway. The planning officer I spoke to said the area is a ‘green reserve’ and permission is required to undertake any such activity which alters the landscape. The planning officer also explained that the activity amounted to an alteration of the road reserve, and permission is required from the Ministry of Infrastructure to do so. An official of the Ministry of Infrastructure said they had no knowledge of what was going on along that section of the highway.

This situation along the highway is bigger than Ms. Matilda, Bay Gardens, or the coconut vendors. It brings into question, the whole issue of zoning and urban planning. It’s an issue that should be dealt with by the relevant agencies, including the Ministry of Planning, the Ministry of Infrastructure, the Development Control Authority, Crown Lands, the Gros Islet Town Council, and the affected parties.

No business establishment, no matter how powerful or influential, should be allowed or permitted to unilaterally make such drastic changes to the landscape or along the highway, to satisfy its own interests, while displacing other persons trying to make an honest living, and placing the lives of motorists and pedestrians in danger. 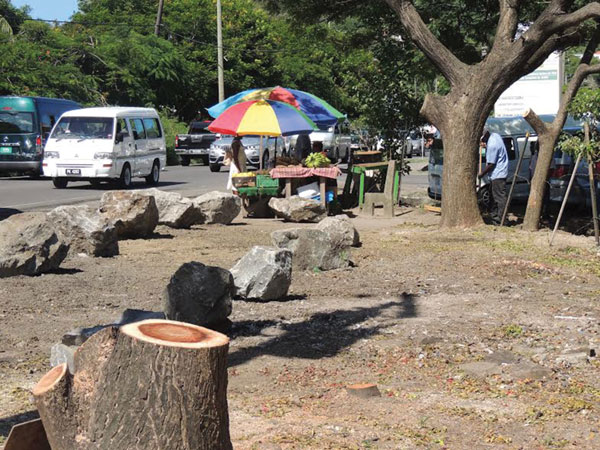