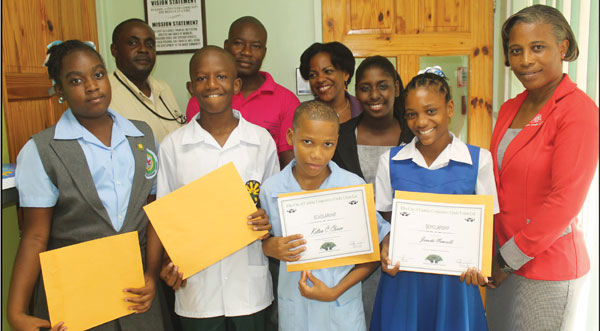 FOUR students have received scholarships and bursaries from the Elks City of Castries Cooperative Credit Union this year.

Janaika Momerelle and Kelton Clerice were selected as the recipients for their stellar academic performance in the Common Entrance Examinations while Stephen Marius and Jayda Gregg received bursaries.

The students and their parents gathered at the Credit Union last Thursday for a brief presentation ceremony where they were addressed by Mr Mario Boyce, President of the Union’s Board of Directors.

Said Boyce: “We wanted to do something meaningful for the members we serve. We had initially planned to provide two scholarships, one to the top performer and one based on financial need. However, the Scholarship Evaluation Committee felt that there were other applicants who performed well but were in dire financial need, so we decided to make available two additional bursaries to these students.”

The scholars will attend the St. Joseph Convent and the Entrepot Secondary School and will be required to maintain a 70% average for the five year duration of their scholarship.

The Elks City of Castries is a cooperative financial institution serving people living and working in Castries and its environs.

Boyce encouraged the students to remain focused and to enjoy their tenure in secondary school. He said: “As a credit union, we are founded on the philosophy of ‘people helping people,’ and we stand behind the principles that promote human development and social responsibility. Offering these scholarships is just one way the Elks Credit Union adds value for our members and assists them with the increasing cost of higher education while emphasizing our commitment to their financial success.”