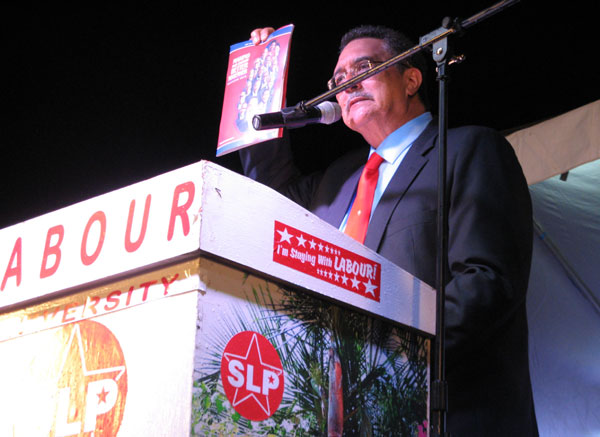 HEAVY rains Wednesday night could not stop the launch of the Labour Party’s Manifesto near the Castries Waterfront. Hundreds braved the inclement weather to hear what the Labour Party had in store for the country for the next five years should it be elected on Monday.

“You amaze me. The St. Lucia Labour Party cannot asked for more. Thank you for your loyalty, thank you for your confidence,” Dr. Kenny Anthony, the party’s political leader told cheering supporters.

The 80-page document with its catch line “With You. For You. For Saint Lucia” is entitled “Making our Country Better Together.”

It not only lists the achievements of the party’s recent term in office (2011 – 2016), which takes up five pages, but also highlights a plethora of programmes to be undertaken by the party if allowed to continue in office.

Sub-titles explain in detail the party’s outlook for the future from how it would maintain fiscal discipline, its plans for an ambitious employment strategy to reduce unemployment to below 15 percent in five years, address the infrastructural gaps and its programme of tax reform continuance to expanding the online tax services to decrease the time and cost associated with starting a business, review the Citizenship Investment Programme, improve Saint Lucia’s attractiveness to foreign investors, support indigenous and domestic investor, enact a special regime of incentives for the services sector, etc., etc.

The manifesto was not distributed that night to supporters. Supporters were told to collect their copies at the various constituency offices of their candidate the following day. Each candidate received a copy on the night.

The glossy pages of the declaration of principles, policies and objectives of the party are divided into several agendas such as: building a safe and just society that speaks of the justice system and the party’s intentions to construct a modern National Judicial Complex; a review of the Criminal Code, something Dr. Anthony says will be done within the party’s first six months in office, should it be elected and generally improve the efficiency of the Criminal Justice System.

Also included in the “Building a Safe and Just Society” agenda is the establishment of a special national task force on rape and sexual offensives as part of the party’s overall intention to protect the country’s women and children, the construction of a new modern National Police Headquarters at La Toc, the establishment of a new Central Police Station on Chaussee Road as part of a redevelopment of Wilton’s Yard, among other things.

Under the agenda “Weaving a Cohesive Social Fabric” the party’s intentions are to provide better housing and access to land to residents, ensure that the education system is relevant and progressive, part of which is the implementation of universal physical education and sports. Other intentions under the social fabric agenda are the establishment of a modern equitable health sector which will include a multi-disciplinary committee to initiate wide-ranging stakeholder discussions and make recommendations to government on the decriminalization and use of marijuana, the youth and the protection of citizens that are vulnerable along with sports and recreational development.

The agenda ‘Defining our National Identity’ is all about promoting the island’s culture and creative industries, building national heritage which will include establishing a national arts museum and art gallery, as well as, strengthening the island’s democracy and Constitution which will include considering the passage of legislation to establish a fixed date for the holding of general elections.

Under this agenda is the provision for more efficient public services, the empowerment of citizens through technology and developing strategic focus in external relations.

The manifesto ends with the listing of several projects to be focused on at the constituency level in the party’s next term in office Each constituency has a list of projects the party describes as ‘priority projects’ to be completed with the five-year span.