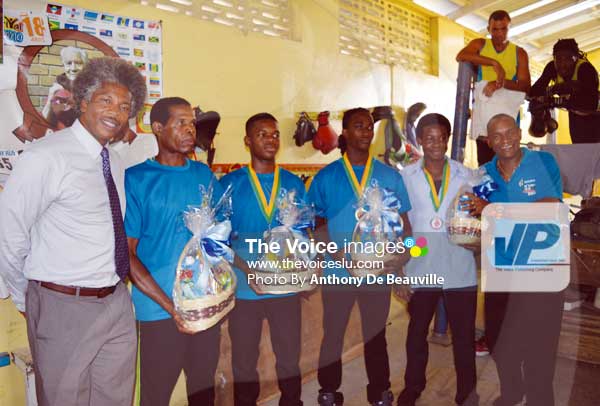 His success has fuelled a campaign for the commencement of rehabilitation/structural work on the dilapidated Vigie Boxing Gym.

On Wednesday afternoon officials of the Ministry of Sports and the St. Lucia Boxing Association along with a number of other boxers converged on the Vigie Boxing Gym to officially welcome home the three-member team and head coach who recently participated in the Guyana School Boys/Girls and Junior Boxing Championships.

Ferrari who captured two of the medals at the games for knockout victories was greeted at the Gym with thunderous applause, along with his colleagues, Tahj Brown and Kareem Boyce.

The contingent was showered with baskets of fruit and juices by acting permanent secretary in the Ministry of Youth Development Dr. Anthony George, who praised the team for their efforts at the championship.

Dr. George said: “This has been a remarkable performance you Nathan Ferrari, Kareem Boyce and Tahj Brown have demonstrated and you have shown us your skills, strategy and all the effort you have put into it. The fourth individual is Head Coach Conrad Fredrick. He is a champion coach to bring back such great report of your performances, not just in the ring, during the fight, but even outside the ring. This says to us we are developing holistic men and women.”

He said the Ministry of Youth Development and Sports will continue to work with the SLBA towards the next big project which is the expansion of the Vigie gym. Dr. George said: “We are currently in talks for the human resources to actually build this. We need a statement from the executive of what human resources they will need to actually construct this. They already have some of the material and they have indicated to us that they need the workers to do the project”.

The two parties met on Tuesday to discuss the expansion which, when completed, according to Dr. George, will be good news for boxing in St. Lucia as the facility will provide proper amenities and conditions for training.