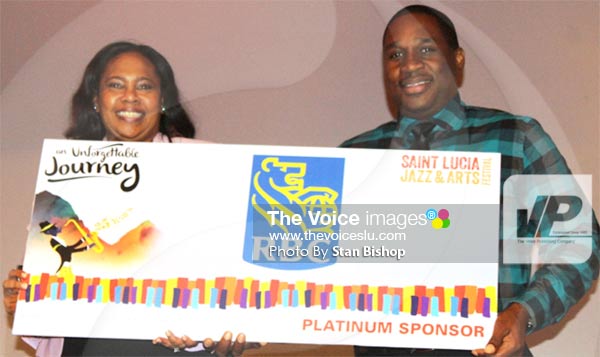 Sponsored
Share this post:
THE Saint Lucia Jazz & Arts Festival might well be two months away. But organizers and sponsors seem intent on not letting up on the momentum they started when the 25th edition of the music festival was officially launched last month.

On Thursday morning, the Saint Lucia Tourist Board (SLTB) held a sponsors cheque presentation ceremony at Sandals Halcyon where sponsors demonstrated their commitment to the festival’s continued success.

The sponsors were treated to a short video that chronicled the festival’s humble beginnings in 1992 and its continued growth, transforming from the previous Saint Lucia Jazz Festival to its new moniker that incorporates other artforms.

Director of Tourism, Louis Lewis, said sponsors play a crucial role since government resources alone cannot cover the costs associated in staging the annual event. He said gate receipts account for about 30% of the total costs spent to host what has now become one of the region’s best music festivals.

“Through the partnership between the Saint Lucia Tourist Board and the private sector, we’ve been able to sustain (the festival) for 25 years and it is no surprise that this year we are adding five new sponsors who have joined to host this event.”

Lewis encouraged sponsors to make the most of their sponsorship dollars by capitalizing on the myriad of benefits that come with being associated with such a major festival, including its prestige.

A few sponsors, including Heineken and Guy’s Car Rentals, were cited for their continued support of the festival since its inception.

First-time platinum sponsor, RBC, has been associated with the festival since 2005, beginning with the Jazz on the Square. Five years ago, they began sponsoring the Jazz Side Stage events.

RBC Country Manager, Sandra Fontenelle, said the bank’s sponsorship upgrade from bronze to platinum is testimony to the company’s recognition of how important the festival is especially to the Saint Lucian community.

“As a leading bank in the region, this platinum sponsorship reaffirms our commitment in the Eastern Caribbean,” Fontenelle said. “We understand the importance of taking bold steps to help our clients thrive and our communities prosper.”

This year’s jazz festival runs from April 29 to May 8 and will feature a number of Saint Lucian and international acts, including Teddyson John, Shaggy, Marc Anthony and Kassav.