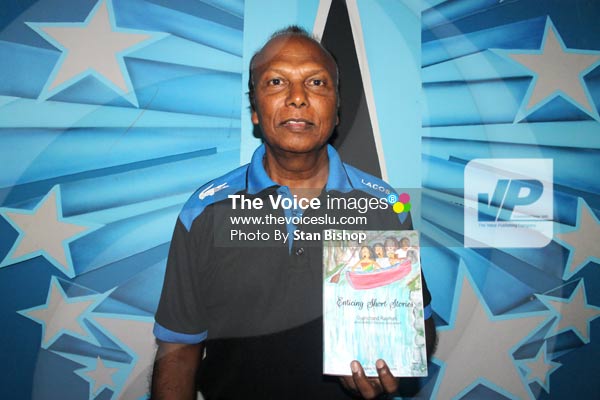 AWARD-WINNING playwright/short storywriter, GyanchandRayman, has finally captured some of his best short stories into book form with the recent launch of his first published collection, “Enticing Short Stories”.

The 62-year-old retired teacher, who spent many years teaching at Entrepot Secondary School, says the collection of 20 short stories is set in various Caribbean islands where he has either lived in or travelled to, including Guyana, Saint Lucia, Barbados, Trinidad and Jamaica. The book, he says, captures the essence of each unique setting so that readers get a sense of realism.

“My settings sometimes shift from one country to another,” Rayman said. “However, what I tried to do was capture the dialect of each Caribbean country in which I’ve set the stories. The themes are varied: adventure, tragedy, romance, humour and a few others. So anyone can read these stories and find a treat. There’s no monotony and this book has enough to entertain and enlighten people.”

Rayman, who is originally from Guyana, said the book is filled with vivid imagery which readers will find interesting as he intertwines captivating prose with enchanting poetry. The stories are all fictitious but many of them are peppered with non-fictional underpinnings, many of which were experienced by the writer himself.

The writer, who has won multiple awards at the M&C Fine Arts Awards for his work, said many of the stories are actually from the manuscripts he entered into that now-defunct awards scheme and have received positive feedback from audiences over the years.

The launch of “Enticing Short Stories” at the St. Lucia Writers Forum’s base camp at the Central Library last Tuesday evening was also fitting, too, as Rayman is a long-time member of that group that was formed back in 1998.

Rayman’s career as an English Language and Literature teacher spans over 30 years, which saw him serving in that capacity in Guyana, Jamaica and Saint Lucia. He also dabbles in poetry and says he is currently doing research for his first novel. Achieving that goal, he said, would be another feather in in his literary cap.

The author has a wealth of experience, having been involved in the Schools Drama Festivals in Saint Lucia. He has also directed a few plays, including some he wrote, and is often called upon to offer critiques of other writers’ works.

Several years ago, Rayman ran a regular column in The VOICE newspaper entitled “Write with Ray” which, he said, was a means of giving advice to writers on how to have a strong command of language.

The new book is being pitched at readers 16 years and over and costs $45 per copy. Rayman says copies of the book will also be available for sale online at Amazon.com.

For your copy of “Enticing Short Stories”, call the author at 718 1587 or contact any member of the St. Lucia Writers Forum (SLWF).