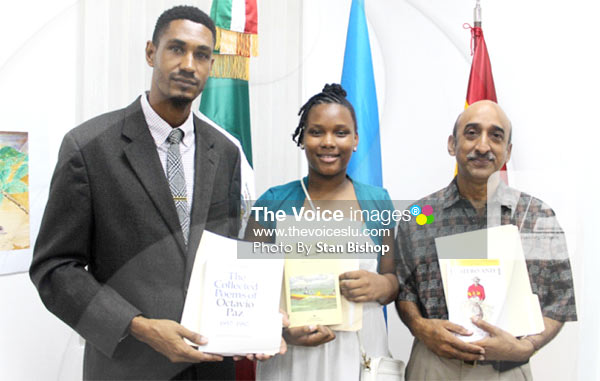 Sponsored
Share this post:
THE embassies of Mexico and Spain on Friday evening awarded the winners of their first-ever “A Picture for a Nobel” competition.

The ceremony was held at the Embassy of Mexico at Vigie.

The objective of the competition was to promote creativity through the transformation of a literary work through photography and painting, as well as to foster deeper relationships between the Spanish language and Saint Lucians.

The competition forms part of this year’s Nobel Laureate Week calendar and organizers hope to continue the newfound tradition.

Participating artists got to choose any technique to convey the central themes in their pieces. The rules: entrants must enter paintings based on Saint Lucia’s Derek Walcott’s “Omeros” and Mexico’s Octavia Paz’s “Between Going and Staying” and photography of Spain’s Juan Ramón Jiménez’s “I Am Not I”.

Walcott won the Nobel Prize for Literature in 1992, two years after Paz did. Jiménez won the coveted prize in 1956.

A panel of judges from the embassies of Mexico and Spain selected the winning entries which will be displayed in both embassies as well as government offices in Mexico City and Madrid.

Prizes included a bilingual copy of both Walcott and Paz’ works and an English translation of one of Jimenez’ book, as well as certificates.

Third Secretary at the Mexican Embassy, Maite Narvaez, said the competition is a perfect way to marry the three poets’ work in a meaningful way.

“We think it’s a very interesting way to promote the creativity of the three countries using something that is very powerful, which is culture,” Narvaez told The VOICE.

JesúsLavalleMerchán, Charge d’Affairs at the Embassy of Spain in Saint Lucia, told The VOICE that the possibility exists whereby one of the artists will be sent to Buenos Aires, Argentina for an artist workshop later this year.