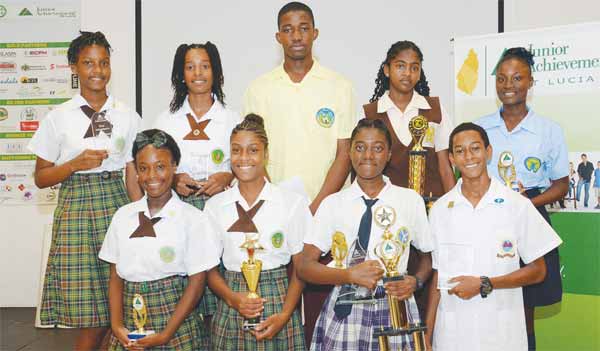 THE 19th Annual Awards and launching of the 20th year of Junior Achievement (JA) was held on Thursday last week, at the Golden Palm Events Centre in Rodney Bay.

All schools which participated in the programmes were recognized for their efforts over the past year with primary schools receiving certificates of participation and students of the company programme being awarded trophies, bursaries and certificates.

Managing Director of RJB Hotel Supplies Mr. Rick John Barnard was the featured guest Speaker. He shared his experience on becoming an entrepreneur, providing inspiration to the students at the ceremony saying: “Having a dream, hard work, determination, passion and staying focused bring about lasting rewards”.

This year’s ceremony formed part of the Ministry of Commerce’s “Business month” and was included in the calendar of activities. The highlight of the ceremony was the presentation of awards to participants of the Company programme as follows: