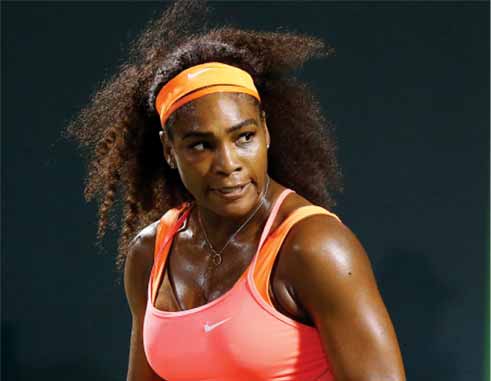 THE hype preceding this year’s US tennis Open was unusual. True, such promotions had become a part of international sporting events and the public had grown accustomed to it. Still, the US Open may have been the most anticipated international tennis tournament in recent times. It was the last ‘grand slam’ for the calendar year and it was to be played at the largest tennis stadium in the world.

Add to this the usual big-name suspects – Federer, Murray, Nadal, and Djokovic; and in women’s – the William sisters, Vinci, Panetta and the tension becomes palpable. The anticipation and excitement was accentuated by the desire of tennis lovers and pundits alike, to witness history. Tickets for the women’s semi-final and final matches were sold out weeks before the tournament served-off, and before tickets for the men’s finals. That had not happened before. The men’s game had previously dominated, attracting larger crowds.

The reason for the turn can be put down to one player – Serena Williams, who was on the cusp of tennis history. Serena has played excellent tennis this year and had won the Australia open (January), the French open (March), Wimbledon (June), and was on her way to a fourth title at the US Open. Winning a fourth title in one calendar year would have placed her among the gods of tennis.

In the long history of tennis, four grand slam wins in one calendar year had been achieved only three times. American tennis enthusiasts and aficionados from the wider world expected Serena to achieve her fourth calendar ‘slam’ in New York. When she easily brushed aside her first two opponents many believed that only Venus, her sister, stood in her way. Then when she later overcame Venus, many thought that the rest was a mere formality and they would be witnesses to tennis history.

But life, fate, God, call it what you may, had scripted a far different story. The brutal truth is that the twists and turns of life are often far beyond human comprehension. Yes, one has to define a goal, prepare properly, and stay riveted on the prize. In this sense a fourth calendar slam for Serena would have been perfectly justified. She has put in more than the prescribed ten-thousand hours of practice. She has shaped her body and her mind to achieve tennis greatness. She has been as focused as a laser beam. But, the story twists and gets tricky – after the ‘but.’

Even as millions watched it unfold, few could believe what they had seen. Few, if any, at the Arthur Ashe Stadium in Queens, New York expected Roberta Vinci to outplay Serena. But she did! Tennis experts had given Roberta Vinci of Italy, a snowball chance in hell against Serena. But the snowball triumphed in the fire. Sporting contests are full of such surprises. Roberta Vinci was ranked at number 43 and had never before beaten Serena. Serena was number one. In layman’s language it meant that Roberta had to climb 42 places and play her best tennis to win their semi-final match-up.

But tennis, as in the more popular sport of football, is not as logical or predictable as mathematics. For example, if team ‘A’ beats team ‘B’ two goals to nil, and team ‘B’ beats team ‘C’ one goal to nil, then team ‘A’ plays team ‘C’ the result ought to be a three-nil victory for team ‘A’. That’s not how things work out in the real world of football. Tennis is no different. Few at the Ashe stadium seemed to have remembered that at the start of the Serena vs. Roberta game.

Before the match one commentator opined that only Serena could beat Serena, in the remaining two matches – the semi-final and final. The pundits had predicted that Serena would stroll into tennis history. But, fate, (God?) is not always easily anticipated. Life does not always proceed in one smooth line, as planned.

Those who believe are aware that a day begins the night before. On the night before her semi-final match against Roberta, it rained and the match had to be postponed to the following day. The interlude seemed to have turned everything around for Serena. Her body chemistry and mind-set may have gone into another dimension, permitting her to feel the trophy in her hands. She may have lost focus and rhythm as a result. Her mind may have rebelled, refusing to accept it would have to wait another 48 hours for that prized trophy.

Whatever it was, no one could tell for certain. Some reckless tongues went so far to suggest that she had gone out with her boyfriend the night before and that affected her performance against Roberta. It was alleged that her coach had commented that Serena looked different when she stepped out of her vehicle that afternoon before the match.

Cheap idle talk must have been brushed aside after Serena breezed through the first set. Thereafter, a switch seemed to have gone off in Serena. Roberta began slowly and cautiously, to ascend. During the second and third sets, unforced errors on which Serena often depends to overcome her opponents were not as forthcoming. Roberta sensing that the tables were turning made few un-forced errors. Serena may have even started to doubt herself. And doubt is the enemy of every sportsman and woman.

The match ended two-to-one in Roberta Vinci’s favour. Serena Williams had lost! She had been denied a historic fourth grand slam title in the same calendar year. Of course that title would have raised her personal profile considerably. It would have provided another solid sporting icon for young black Americans to copy. It would have been a great story. Instead, it was the game which stunned tennis pundits…and the sporting world.

The story which emerged was unpredictable. Like a good spy novel it waited until the very end to reveal guilt. Two young Italian women ranked at 29 and 43, from the same region of Italy where they first played each other at age nine, and became close friends, were about to make tennis history. They had played doubles together but had never opposed each other in a grand slam. Neither had won a tennis grand slam. That story was to change at the New York open.

A ‘rags to riches’ is more likely to warm the human heart and teach us to believe more in ourselves and in hard work, training and focus. The young Rick Wayne is a good example in body building and journalism. Focusing on Serena, we may have overlooked the hard work of Claudia Panetta. A Serena win may have denied us the opportunity to see how hard and long, Roberta and others like her have worked. The reality is there is hardly any difference between the top hundred in pro-tennis. Anyone who puts in more than the mandatory ten-thousand hours, and stays focused will one day surprise the pundits whatever his/her dream, to pursue – as Rick Wayne has done. He too, is a game that surprised pundits!