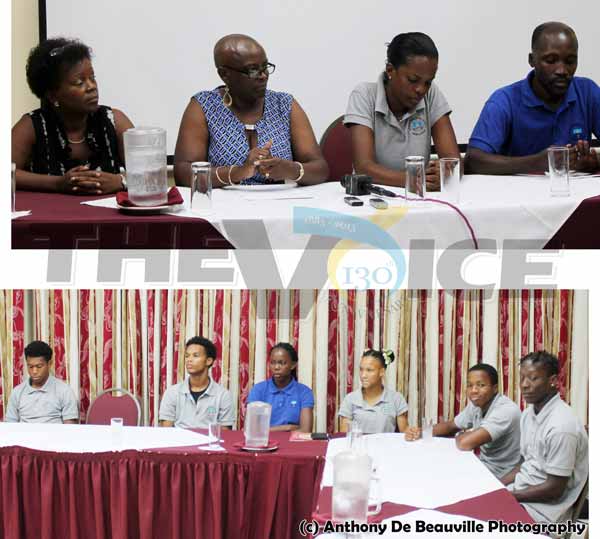 THE St. Lucia Olympic Committee activity when that organization presented its Commonwealth Youth Games athletes to members of the media on Wednesday evening.

Addressing the gathering, president of St.Lucia Olympic Committee Fortuna Belrose said that her organization was pleased with the performance of the team sat the CYG in Samoa.

Similar sentiments were shared by the three officials Mellissa Francois, Wayne Benti and Dr. Leslie Bishop who accompanied the team to the games.

“From all indications from the coach and manager our boxer was on a serious weight management programme and he reneged on his self-management plan. The reality is he may have eaten too much or had too much fluid intake as Samoa was hot,” she remarked.

The President added: “While we were all disappointed that our boxer did not compete, I must say I admired his composure under rejection. He was remorseful and disappointed but he has learnt a life lesson in his young boxing career. Interestingly he was hoping that he would have gotten the opportunity to box in the weight category as it is the norm in our region to give and take on the weight”.

Despite this distraction, St. Lucia realized a podium. Rochelle Etienne won a bronze medal and the SLOC believes that the experience of the Youth Olympics last year contributed significantly to her being conspicuous at the Games. Her poise, and maturity in the field were obvious.

Belrose said “as president, she was very proud of the statement the team made at the opening of the Games. “As you know we should have been the recipients of the Quaiche for 2017 and all eyes were on team St. Lucia. Our young people paraded with class and held the flag up high even if was hours before the disappointing news of us not hosting reached them”.

Belrose said the SLOC would continue to support its affiliates to give opportunity to young people to demonstrate their skills and realize their personal goals through sport.

From the Commonwealth Games Federation’s perspective St. Lucia was able to give good notice so that the CGF could find a new host for 2017.

She again commended Rochelle Etienne on her bronze medal performance and informed her that this achievement came with an academic award or a grant which would be kept in trust for her. She also stated that all our young people who represented St. Lucia in Samoa were excellent ambassadors and the SLOC will continue to wish them well in their endeavours.