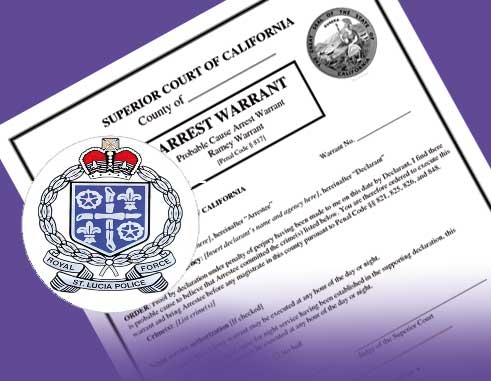 POLICE are calling the execution of a search warrant on a Saltibus resident by one of their own a wrongful act and one that should not have been happened.

Police, however, are not investigating the matter, which was brought to their attention this week by this reporter who obtained a copy of the warrant from the aggrieved resident.

The resident, Daniel Isaac has yet to lodge a formal complaint with police regarding the warrant and the search that was conducted at his home for controlled drugs by five plainclothes police officers last month. However he has vowed to take the matter as far as it could go so as to stop police officers from treating citizens the way he was treated.

The search warrant was not dated and was filled in by a female officer who obtained the necessary information from Isaac’s identification card given to her by Isaac when he was asked to hand it over.

“I have no quarrels with police officers doing their jobs, but when it appears that that job has a political fragrance to it, it has to be stopped.” Isaac said.

According to Isaac, the police officers illegally searched his home issuing him a fake warrant as proof of the search’s legality.

“Never have I seen this done before. I am a retired British soldier. I do a lot of work with young people. In 2012 I was part of the Big Brother programme at the Boys Training Center in Massade, Gros Islet. I did some work with some of the boys there. I have a problem with the type of warrant that was handed to me. Can a police officer fill out a search warrant on premises that he/she is about to search and sign it in the same place a magistrate is supposed to sign?.” Isaac asked.

But why would police officers appear at Isaac’s home with a blank warrant to search for controlled drugs?

“I’ve never been known to deal with drugs. I was so shocked? As to why I was targeted by the police I do not know. However my name was being circulated in the community as the possible chairman of the United Workers Party Constituency group. I do not know if there is a link but it is certainly something to think about,” Isaac said.

The department has since described the action of the officer as an illegal act.

Two teenage boys who Isaac’s in the house were also searched after which were told to vacate the premises.

The warrant bore the name of a police Corporal. Astonishingly the officer who wrote up the warrant also scrawled some lines in the place a magistrate was supposed to sign. The warrant was signed by the officer in full view of Isaac.

The police press department has directed The VOICE to the section of the Criminal Code that deals with search and seizure.

The Criminal Code also states, among other things, that where a police officer believes that it would be impracticable to appear personally before a magistrate to make an application for a warrant, a warrant may be issued on information submitted by telephone or other means of telecommunication….

Nowhere in the Criminal Code is it stated that an officer has the authority to fill out a warrant and sign it in place of a magistrate or a Justice of the Peace.

Nowhere in the Criminal Code is it stated that an officer has the authority to fill out a warrant and sign it in place of a magistrate or a Justice of the Peace.