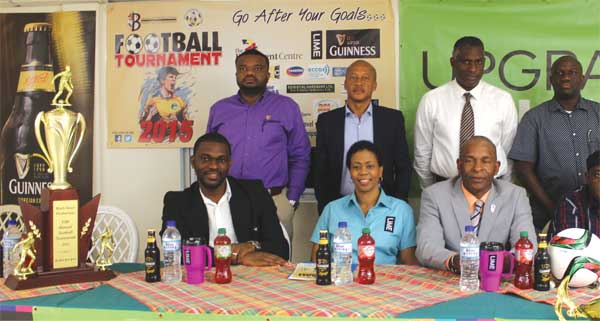 THE 2015 Blackheart Knockout Football Tournament with the theme “Go after your goals” was launched on Tuesday evening at the Beausejour Cricket Ground.

On hand were representatives of the 16 teams participating in the tournament, sponsors, the media, invited guests and other well wishers.

Speaking at the launch was Brian Mc Donald, Director of Blackheart Productions who gave a tournament overview and what can be expected for this year.

Mc Donald indicated that there would be a number of new initiatives for this year’s tournament. One was that the two worst losers from the first round this year would drop down to the play offs next year. Also the extra time period for matches drawn at regulation time will only be instituted from the semi final stage this year. In the preliminaries and second round quarter finals the matches will go straight to penalty kicks. For the first time the Phillip Marcellin Ground will host the semi final round, while the championship team will take home EC$25,000.00, up from $20,000 last year.

Three days of the popular eight day tournament will be held at the Beausejour Cricket Ground on September 19 (opening), September 20 and October 10 (Grand Finals). The Phillip Marcellin Ground will host on September 23 and 30, and the semi finals on Saturday October 3. The Soufriere Mini Stadium will be host on September 26 and 27.

There will also be lots of individual prizes for the outstanding performers at the tournament and some teams as well.

As in last year’s tournament $50.00 will be paid for goals scored in the first round and $100.00 from the second round up until the finals at the BCG.

Blackheart Productions advisor Cuthbert Didier in addressing the gathering said “Go after your goals” is very symbolic, very practical in the game of football”.

He continued, “As Cuthbert Didier through my company All Inc. I am going to match a donation from the Blackheart proceeds for the fire victims of St.Lucia and I am going to suggest that David Christopher open that account and give the management for that account to the Minister of Finance. A number of people have lost their dreams and aspirations through fire in St. Lucia; while the money in the account will not solve it, it will bring some relief to the families who has lost a lot”.