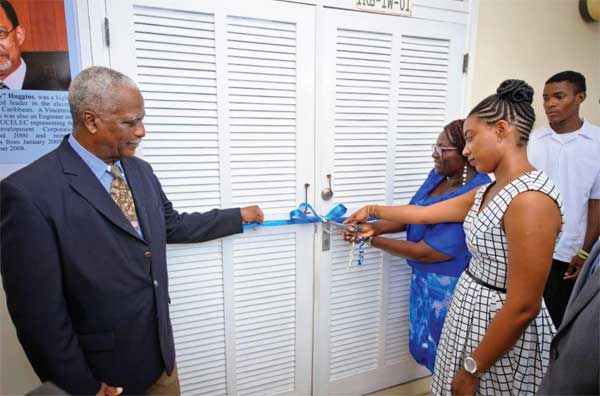 FORMER St Lucia Electricity Services Limited (LUCELEC) Managing Director Bernard Theobalds spoke of the synergies of the past and future when he addressed the opening of the LUCELEC Electronics Workshop at the Sir Arthur Lewis Community College (SALCC). The workshop is named in honour of him and former LUCELEC Director Joel Huggins.

The facility will allow the College to introduce more specialized and a wider range of courses in Electronics and Electrical Technology including Video, Audio, Lighting, Security Surveillance and Instrumentation. It will also allow the College to accept more students into the programme.

The LUCELEC Trust, contributed $300,000 to refurbish and equip the workshop.

LUCELEC’s Managing Director Trevor Louisy says this gift to SALCC and the nation fits in perfectly with the recurring themes in all the initiatives the company supports – learning, education, excellence, providing opportunities, and laying foundations for the future.

Education Minister Dr Robert Lewis commended LUCELEC for its unwavering support for education, especially in Science and Technology. He noted that the power company was the main contributor to the annual National Schools Science & Technology Fair and the annual Student Programme for Innovation in Science and Engineering (SPISE) intended to nurture and groom the next generation of technology entrepreneurs in the Caribbean.

This contribution to the redevelopment of the Electronics Workshop at the SALCC, he noted, helps to position the College to deliver the cadre of science and technology professionals of the future that the country needs to solve some of its challenges.

For Theobalds, the establishment of the LUCELEC Workshop continues a partnership that began when the then Technical College (now the Division of Technical Education and Management Studies where the LUCELEC Workshop is located) instituted the nation’s first formal apprenticeship programme for the technical training of LUCELEC employees. He said: “This was at the heart of the company’s efforts to create a highly disciplined and professional organization and the results, thanks largely to the College, remain with us to this day.”

Theobalds was also very pleased to share the honour bestowed upon him with Huggins, a man he says was his “old contemporary and friend.”

He recognized Huggins for his role in the “vanguard of the introduction of professional West Indian engineers into the electricity operations in the territories where the Commonwealth Development Corporation (CDC) operated, which prior to 1971 was an almost exclusively white, expatriate organization.”

It was Theobalds, Huggins and Frank McConney of Barbados Light and Power who changed the landscape of the regional electricity industry, creating the Caribbean Electric Utilities Association (CARILEC) which currently boasts a membership of “virtually every power company in the entire region.”

In his remarks, Theobalds was just as complimentary of LUCELEC staff who he worked with for 25 years, recognizing “the contribution of LUCELEC employees – past and present, some deceased, some retired, some still with the company – who demonstrated the capacity of people working together as a team, to achieve any pinnacle and who created what is widely recognized as among the premier power utilities in the Caribbean.”

Theobalds and the widow of Joel Huggins, Clydella Huggins, unveiled a plaque at the entrance to the workshop and cut the ribbon to officially open the facility.