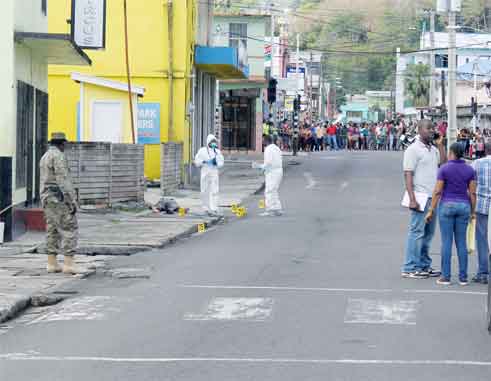 DESPITE the passing of legislation to curb gangs the first half of this year has been plagued by gang activity with all but one of the murders occurring in the City of Castries taking place on Chaussee Road being deemed by police to be gang related.

According to just released police statistics St Lucia recorded 10 murders between January and June, seven of which took place in Castries, with one each in Gros Islet, Choiseul and Vieux Fort.

Last year, for the same period, 14 murders were recorded according to the police crime statistics for the first half of this year.

The Chaussee Road thoroughfare has been a hotbed of violence this year beginning in the first two weeks in April when the road became a killer strip attracting curious crowds to view dead bodies, victims of gang and gun violence.

The third homicide for the year 48-year-old Asher “B.J.,” Emmanuel succumbed to his injuries on a Chaussee Road sidewalk.

The fourth victim for the year, a 43-year-old who goes by the name of Nelson was shot and killed on the sidewalk near Courts show-room on Chaussee Road.

By mid-April life along the Chaussee Road was considerably reduced as passersby changed route and businesses along the road started to suffer from lack of sales forcing some to cease operations temporarily as a result of the violence.

Now that life has gone back to normal along the street there are reports of missiles being hurled at police officers who patrol that strip of road.

Acting Police Commissioner Errol Alexander has warned the perpetrators to desist from such actions because the police will match force with force if pushed.

Most of the murders have occurred in the central sector of the country. The northern and southern sectors only accounted for 60 percent of the reported murders.

An analysis of the murder victims recorded for the first half of the year shows that there was an increase in firearm related murders, and a reduction where blunt force instruments were used. Men accounted for 80 percent of the victims with 70 percent of these victims being over the age of 30 years.

For instance in the first half of last year guns were used in five murders compared to six this year.

Things were peaceful for the first quarter of the year when for the first time in20 years, no murders were recorded for three months compared to seven murders for the corresponding period last year.

But all this changed in April when seven murders were committed . In fact, April was the month with the highest number of homicides both last year and this year. Last year the month of April recorded five murders.