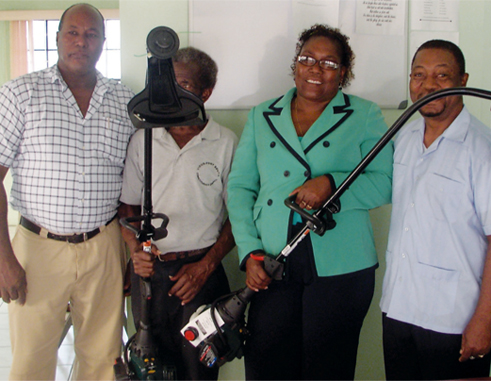 A lack of adequate funding from the government has forced the mayor of Vieux Fort, Winhall Joshua, to seek assistance from citizens in generating resources to enable the Vieux-Fort South Constituency Council to carry out its mandate.

Recently, Joshua was able to get a Saint Lucian couple living in Canada to donate two weed whackers to the Council, whose operations have been severely hindered by a lack of funding and equipment.

The donation was made by Albert and GinnieBeausoliel, who Joshua said were quick to respond to his request for assistance.

“The two grass cutting machines will provide much needed assistance to the council and will go a long way in enabling us to overcome the difficulties caused by a shortage of equipment and tools. This is affecting us very much,” Joshua said.

He said the council appreciated the donation a great deal and was happy to know that there were Saint Lucians overseas concerned about the town’s plight.

But while Joshua is estatic, some staff of the council are not too impressed with the donation. They describe the 45 h/p machines as too “flimsy” to be of much use to the council, whose workload requires much more heavy duty machines.

The lack of equipment and funding has been severely affecting the maintenance department of the council, in particular. Workers in that department have had to be improvising to repair equipment and tools which they had already rejected and were on the verge of discarding.

It was this lack of resources that had caused two councillors to resign in disgust a few years ago.

Joshua, who was appointed mayor of Vieux-Fort over a year ago, made a number of promises to the townspeople at his swearing-in. One such promise was to obtain medical equipment for St. Jude hospital. This, he convinced he would be able to pull off because of his contacts in Canada, where he previously served as Consul. However, so far it has not come to reality.