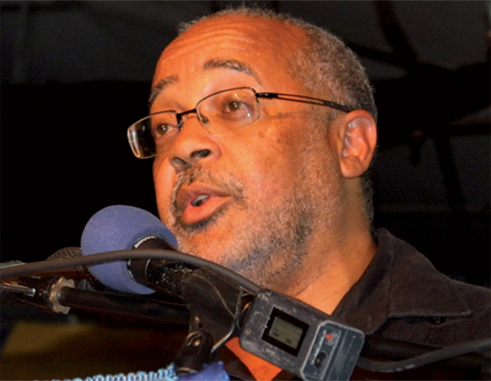 WHEN people like Dr.Didacus Jules speak, it certainly doesn’t hurt to at least listen to what they have to say. Quite often, we get a bunch of technocrats who cannot tell the difference between their cuff link and belt buckle trying to limit everything to textbook language. The reality is that while technocrats do have key roles to play in the development of societies, such roles are quickly being eroded by people who champion pragmatism over armchair posturing. Dr. Jules is one such pragmatist.

I got the chance – nay, the privilege – to listen to Dr. Jules deliver the Sir Arthur Lewis Distinguished Lecture last week Thursday as part of this year’s Nobel Laureate Week activities. His address, entitled “The Narcissism of Small Differences: Eastern Caribbean Integration and its Implications for the Wider Region”, delved into the awkwardness still being exhibited by the Eastern Caribbean in its attempt to truly assert its strength. As Dr. Jules tells it, much lip service is being paid to the cause of development while the moral and mental fortitude on the part of those on whom the task of getting things done is still found wanting.

“We are a society in desperate search for heroes but in that desperation we are continually failing to situate their work, life and example in a context that fortifies our own search for answers,” Dr. Jules said in his introduction. “So we quote (Derek) Walcott with a facile incomprehension that does not struggle to find the meanings that he himself wrestled out of the words. We quote Arthur Lewis with a conviction whose orthodoxy we have yet to subscribe to. His most famous quotation that “the fundamental cure for poverty is not money but knowledge” is repeatedly cited as an infallible truth but, sadly, one whose application is glaringly absent in our construction of education.”

If Dr. Jules had his way, the education modules the region had adopted over the past decades would have been advanced by decades many decades ago. Having served as Registrar of the Caribbean Examinations Council (CXC) for some years until his recent departure to take up the position of OECS Director General, he would have indubitably left that 40-odd-year-old institution in better academic and practical shape. Not only has he transformed the curricula to bring them up to speed with the fast-changing pace of globalism; he actually makes me want to sit a few more CSEC subjects! By reinvigorating the syllabi and courses offered by CXC, Dr. Jules has done what everyone else let remain static for too long.

But it is his current role as OECS Director General for which I think he would make an even more impactful contribution to this region. Having been appointed to that post last June, one got the impression that — even though the OECS had already been making real strides towards closer linkages via an Economic Union and making people begin to understand that the OECS’ Revised Treaty of Basseterre is a living, breathing thing — he would speed up the pace of things, anyway. Having served in Grenada’s education system during that country’s revolutionary period in 1979, Dr. Jules is, I think, one of the few regional game-shifters who believe that any new development must be predicated on a new way of thinking of and doing things.

Sitting through his lecture and observing the candid manner in which he answered some of the questions from the audience afterwards, I got the sense that if the OECS Commission is not willing to keep up with his pace that this might very well be his last regional appointment. He just might end up in the United States, Europe or Africa where his services might be more appreciated.

Three crucial topics he spoke on really got me nodding last Thursday. The first related to what Dr. Jules considered many missed opportunities on the region’s part to establish really tangible benefits from our ties with Cuba. Despite the Cubans – as had multinationals – showing increased openness and support for the region, he said the region had for too long seen Cuba simply as a source of medical scholarships and humanitarian aid.

“In the sphere of business,” he said, “we have not begun to scratch the surface of opportunities with Cuba.”

Describing the region’s apathy to the economic opportunities that exist in Cuba as “a perfect example of what happens when you drag your feet” that leads to a case where “circumstances change and you’re going to get left behind”, Dr. Jules said the region “could have been way ahead of the removal of that embargo” placed on Cuba 50-odd years ago by the United States. While he was still at CXC, he said, he suggested to the UWI Vice-Chancellor about UWI collaborating with Cuba in the area of biotechnology. Cuba’s vast number of patents for new drugs and medicines that were not able to reach the international market due to the embargo could have been able to do so via a mechanism that would partially circumvent the embargo and have a shared marketing of such resources between Cuba and UWI.

“Unfortunately, that was not taken up,” Dr. Jules said. “Now that the Americans are in there, we’re suddenly scrambling to find our feet.”

The second topic that piqued my interest had to do with the region’s ICT development strategy. With that area of interest now being threatened by the recent merger of telecommunications providers, LIME and Columbus Communications, the OECS Commission is wary of monopolistic tendencies creeping into that sector yet again. The concern is so grave that the Commission released a document, the “Draft Paper on Advancing Telecommunications Policy and Regulation in the OECS”, earlier this month. The document speaks to the adverse effects of such a merger. Last Thursday, his language was strong.

“We really want this document to go viral because that is our best way to slap the face of arrogance of these multinationals who have explicitly said that the OECS does not matter,” Dr. Jules said. “When we looked at the figures, (we see that) the telecoms providers in the Caribbean made something like 23 or so billion dollars in profits in the last couple years from this region. That is extracted money from this region. So we need to get past the smoke and mirrors of this thing…That’s why we need to move this debate from an emotional level to a purely scientific, fact-based discussion (as to) what is in our best interest.”

Among Dr. Jules’s concerns is that the agility, vision and responsiveness displayed by Columbus Communications would now be “swallowed up by a company that has such a rapacious history of just profiteering in the market and not being responsive to customers” which “is going to turn us totally backwards.”

The third — and most important topic has to do with the region’s food security. The region, he said, is working closely with the Food and Agriculture Organization (FAO) to formulate a food plan that goes beyond food importation. Among the components of the plan is for governments to promote urban gardening projects in especially areas where high poverty concentration is the norm. By identifying through nutritional studies what nutritional deficiencies exist, the appropriate crops will be grown at the household level. The Cubans, he said, have done an amazing job at doing just that. According to Dr. Jules, the OECS’ food import bill over the last two decades has almost doubled, reaching a whopping US$417 million in 2011. That money, he believes, can be used to provide jobs by having the region grow most of its food.

Having followed his work for years now, there’s a part of me that still believes that the man still has the knack for putting his energies where his words are. The other part of me, however, tells me that some risk is at stake here: that yet again Dr. Jules might be a voice of reason and action still contending for positive and tangible change in a culture where talk-shops, workshops and rum-shops take precedence to rolling up one’s sleeve and getting the required job done.

If you asked me, the ideals that Dr. Jules are currently pushing as OECS Director General might just find him pushing some politicians’ wrong buttons, resulting in him getting pushed out. For the region’s sake, let’s hope that is not the case.