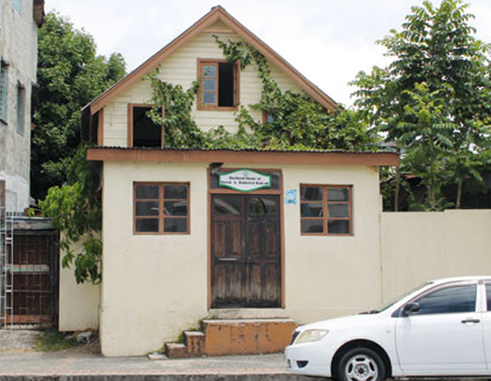 The sod turning ceremonyfor the construction of the Walcott Place Project will take place on Saturday, January 17 from 4 p.m., the St Lucia National Trust announced today.

The ceremony will take place at the intersection of Chaussée Road and Grass Street. The event, which signals the official commencement of the project will be held under the auspices of the Trust’s Patron and Governor General of Saint Lucia, Dame Pearlette Louisy.

The project will include the restoration and transformation of the house in which internationally-acclaimed poet/playwright, Derek Walcott, and his brother, playwright, Roderick “Roddy” Walcott, were born and raised.

The building is finally getting a long-overdue facelift, compliments the Republic of China (Taiwan). In the process, the project is also expected to transform the Grass Street, Castries landscape immensely.

Work on the project – dubbed the “Walcott Place & Grass Street Urban Enhancement Project” – is expected to begin in the next few weeks. The multi-collaborative project is being spearheaded by the Saint Lucia National Trust (SLNT) in partnership with the Ministry of Physical Development, Housing & Urban Renewal, with the latter charged with the design, planning, and project implementation.

The Walcotts’ childhood home, located at 37 Chaussee Road, was acquired by the Saint Lucia government in November 2005 and subsequently handed over to the SLNT. The principal aim of the transfer was that the SLNT ensured that the house became part of Saint Lucia’s patrimony. Prior to its acquisition by the government, the house had been used by a commercial printer, the Lithographic Press, which had by then ceased operating there.

Taiwan’s Ambassador to Saint Lucia, James Chang, in October presented a cheque for US$ 500,000 (EC$ 1, 344, 100) towards the mobilization stage of the project. According to the Ambassador, the initial cheque is part of a total US$ 2.8 million (EC$ 7.5 million) that Taiwan pledges to commit to the project over the next three years. Ambassador Chang said the project bears much significance — not just for Castries but the country at large.

“This project will convert the childhood home of the twin brothers — Derek and Roderick Walcott — and adjacent properties into a national cultural landmark as a centre for interpretation, inspiration, learning and celebration of the Walcotts’ artistic genius,” Ambassador Chang said last Friday. “(It will) also rejuvenate the economy of the Grass Street area, an inner city zone within Castries.”

The ambitious project will comprise among other things, a reconstructed Walcott House that will preserve the traditional architectural vernacular that will serve as a museum and gallery, an arts centre with additional exhibition space, a 150-seat training and experimental black-box theatre to be used for teaching theatre, as well as art rooms and reference library. Other facilities will include a gift and book shop and restaurant with indoor and outdoor seating set within a courtyard. Another major feature of the project is that a linkage road will be constructed that will end Grass Street’s days as a cul-de-sac.