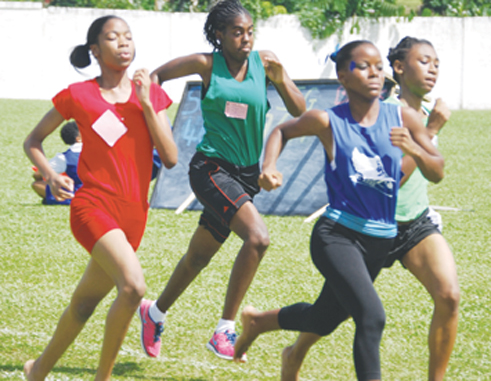 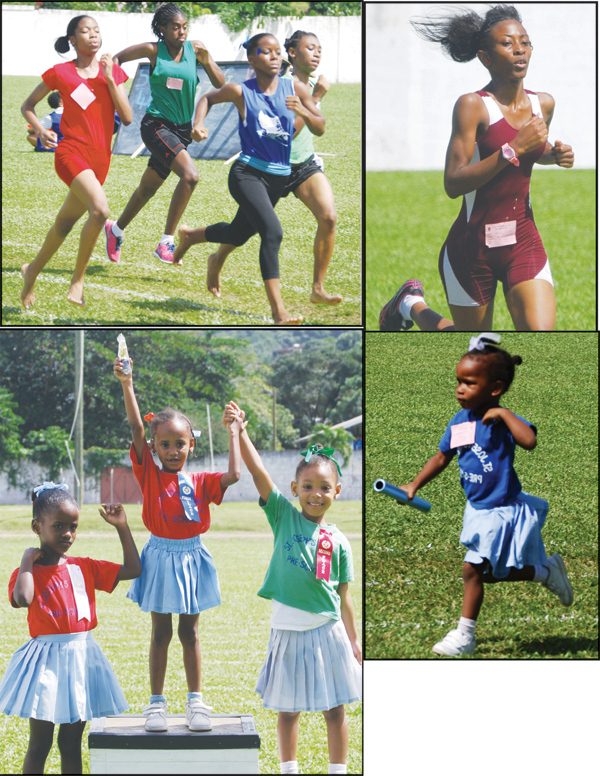 DESPITE soggy conditions on Thursday, well over 700 students from St. Joseph’s Convent converged on the Mindoo Phillip Park for the schools annual inter house sports meet.

In her brief remarks to students, staff members and officials, school principal Sister RufinaDonat paid a memorable tribute to one of the stalwarts at the school Mary Ann Montoute:, “Today will be a very significant and memorable one for us here at SJC. We have travelled a long way with our coach and Head of Physical Education Teacher Mary Ann Montoute. She has a vision for sport at SJC, we are reaping the benefits. The standard and performance surpasses every other when we speak and I commend her for her dedication and hard work.

Ms. Montoute will be retiring from the service in October 2015.

Aaliyah Estephor continued her good run of form on the day when she captured her second gold for her house winning the 150 metre event in 20.80 seconds). DesirayDesir too came back to win the 200 metres in 25.51 seconds). In Division 3, the 100 metres event was won by Neema Leon in 27.82 seconds, while in Division 2 – it was Leslie Lesporis out front in 29.19 seconds), and Rochelle Etienne in Division 1 in 28..79 seconds.

To bring the curtains down St.MariaGoretti athletes maintained their dominance by winning another three out of five races in the 4x400m relay. In Division 3 they won in a time of 5.20.56 seconds, in Division 4 in 5.21.68 seconds and in Division 5 in a time of 3.34.26 seconds.

SJC pre school students also took part in the championship. The little ones showed the many fans present that the athletics well is overflowing with talent.