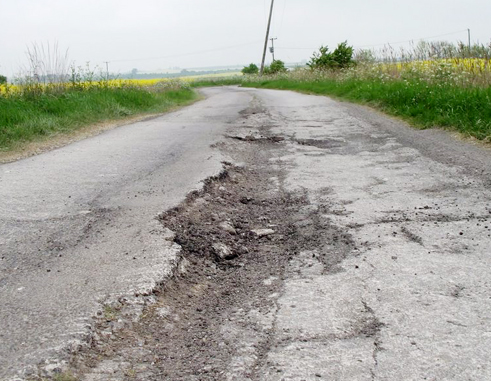 RESIDENTS of Banse, La-Haut and La -Grace in Laborie are breathing a sigh of relief after the signing ceremony to mark the commencement of the rehabilitation of the roads in their community, took place last week.

Over the past few years, they have been bitterly complaining about the crater-ridden roads in certain parts of their community, which they say has affected several aspects of their lives. The residents say they were wondering whether they had to wait an eternity to see the commencement of the rehabilitation of the roads.

But now a $23 km road project including the full rehabilitation of approximately10km of road network within Laborie village and Banse/ La Haut is set to get underway.

The situation had resulted in some residents expressing disgust with their Parliamentary Representative, Alva Baptiste, who they say had given them the assurance that the commencement of the rehabilitation of the roads would have commenced much earlier.

At the moment, preparatory work is taking place on the roads, but residents say it has already brought them some relief and, they are eagerly awaiting for the completion of the entire project.

President of the Laborie Minibus Association, Willie Jeremie, said the rehabilitation of the road was long overdue, but he was happy to see that it had commenced.

“The work on the roads will be of much relief to the minibus operators and residents of the community. We have been suffering for a while…,” Jeremie said.

According to him, because of the deplorable condition of the roads in the Banse/ La Haut area, minibus operators in Laborie were reluctant to ply the roads there.

Nigel Dickson, another resident of the area said the situation was of grave concern to residents there.

“Over the past few years, on a number of occasions, I had to park my vehicle and travel with a public transport, due to the deplorable conditions of the roads,” he lamented.

He felt it was time St. Lucians made their voices heard whenever they were affected and allow themselves to be intimidated by politicians.

“People must not remain silent when they are affected. They must react and send a strong message to the relevant authority…” he said.

Janine Gabriel said over the past few years, commuters encountered much inconvenience getting to their homes, due to the reluctance of minibus operators in Laborie to ply the roads in the Banse/ La Haut area.

‘We feel a bit better now that work has commenced on the road,” she said.