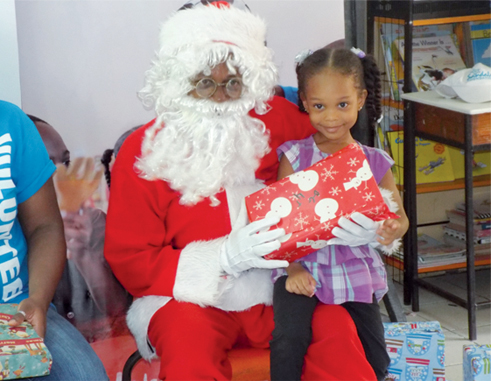 LAST Christmas many persons and organizations offered toys and assorted goodies and meals to those most in need. Such giving is not unusual at Christmas. The spirit of giving without any hope or expectation of return makes charity a meaningful aspect of human life.

None of God’s other creations are known for such works of gift giving – charity. But Christmas lasts only two to three weeks over here. What becomes of the gift recipients after Christmas when life returns to its hard and challenging ways? Will these people still be at the receiving end of donations next Christmas? Or will there be hope of gainful employment and a better life? Will those who received gifts last Christmas become donors next Christmas?

These are questions which leaders in the private and public sectors as well as those in civil society must answer honestly and fearlessly. Based on personal experience it is reasonable to say that not much will change. Still, we need to be aware that it often takes no more than one individual to make a difference in the lives of a community or a country. It must therefore be the hope and prayer of every Saint Lucian that such an individual (or individuals) will rise to the challenge of transforming minds and attitudes towards a better, brighter future in 2015. In particular we pray that the unfortunate and jobless will rise from the quagmire of poverty, drug addiction, recklessness and crime.

True and uncompromising leadership will be called for in 2015 if the national economy is to be turned around. Short of general elections there ought to be some semblance of a re-ordering of the Ministerial portfolios of persons in leadership positions in the public State sector. For example, the crucial ministries of Agriculture, Health, and, Finance need fresh blood and new hands. In addition much will be expected from the private sector, civil society and religious bodies. It is my hope and prayer that such leadership will soon begin to express itself in this New Year. The starting point ought to be a national discussion with pertinent contributions from an alert public on how a sinking ship of State – the national economy – ought to be revitalized. The time may also be right to encourage persons who have nothing useful to offer except narrow, regurgitated partisan garbage, to read more, return to school and pay more attention to them, forgetting politics.

As a people we need to make a better effort to raise the standard of debate and insist on excellence in all we do. There is certain to be talk of planning for Nobel Laureates’ week. Perhaps there needs to be a national discussion about how best to inculcate the message of excellence, perseverance, effort and focused attention which the two Nobel Laureates teach the rest of us. Our leaders (from the three sectors mentioned above and including those in religions) must design a campaign to kick out mediocrity in every aspect of life whilst demanding greater effort and productivity from the citizenry, including sportsmen and women. Such a campaign to weed out mediocrity and institute measures which will result in greater and more efficient output and performance will be the best gift that those who have been tasked to lead can offer the nation. Such a united approach calls for courage and vision whose tiny shoots emerged last year after certain persons were pushed too far.

My wish for Saint Lucia is that we begin the long and difficult road to rehabilitation and progress. This plus a continuous striving to be the best and a determination to stay until excellence is achieved is the only way to economic development. Carless and haphazard effort and an unwillingness to pursue excellence will not cut it. We can no longer accept anything less than the very best from every sector of the society. We ought to wake up each day determined to add something of value to our lives and surroundings. Waking up early is one key. Working for the hours paid is another. We cannot go to bed with the mindset that we will do so-and-so tomorrow morning, if we feel well enough. No! The bedtime mindset must be to wake up at a certain early hour the next day and to proceed with the task we set ourselves the night before. If an early morning task is not possible, then fill those early hours with prayers and contemplation of something good and elevating. Just do something positive and useful every day.

The early discussions for the months of January and February ought to be spent on focused attention on how best to get Saint Lucians to work longer and harder for themselves and their families. What ought to be done by whom in order that the wider community can benefit socially, financially and spiritually is a matter which calls for real and genuine leadership.

We cannot jam ‘de carnival muzik’ as if someone was deliberately trying to keep us from thinking more seriously about the human condition this early in a New Year. How can our leaders change the mindset which focuses on partying and drinking at the expense of work, study and greater effort? Excellence cannot be too much to ask for as we embark on a new journey in a brand new year.

Ever since adulthood and long before venturing into politics there was something I wished to say. What exactly that something was and to whom it should be addressed was not clear. Having arrived at maturing and having gathered confidence along the way I discovered that it was to the people of Saint Lucia I wished to speak. It was to ask them to rise from their slumber and arm themselves with the zeal to work tirelessly for themselves whilst putting aside their learned laziness. It is a call that must be made afresh each new year. The forces of inertia and laziness are constantly at work. Only constant effort and determined hard work on the scale of that practised by our Nobel Laureates (and others who have not shirked from hard work), will see us to a better place.

The gift which keeps on giving is the example each generation sets another by its commitment, its industry, its discipline and its sacrifice. I am finally finding my voice and the cause which deserves promotion.