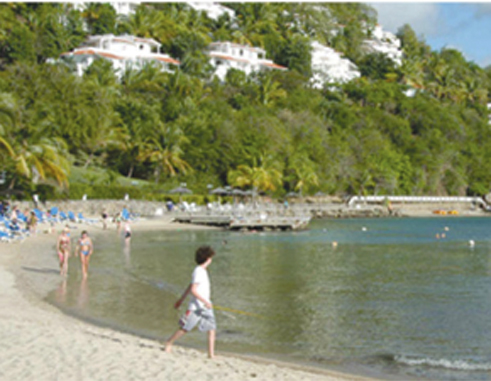 IN 1999 I was a member of the St. Lucia delegation which was attending the first Summit of Latin American and Caribbean countries and the European Union, which was held in Rio De Janerio, Brazil. Accommodation was provided in hotels along the famous Copacabana Beach in Rio. I was struck not just by the beauty of the beach, but more so by the location of the tourism plant- the hotels- taking advantage of that wonder. It is a picture that is stuck in my memory.

Copacabana Beach is very much like our Vigie Beach in St. Lucia, except that it is probably at least twice its length and about three times its width. You would have thought that such a beach would have been cluttered with hotels- as our beaches in the Caribbean. Well no and yes. Return to Vigie Beach and imagine this is Copacabana Beach- there is a road separating Vigie Beach from the airstrip. Well there is a road separating Copacabana from the hotels. It runs the full length of the beach. You can google it and see for your self. All the hotels making use of Copacabana Beach are next to that road. Imagine we closed down Vigie Airport and built hotels all along the airstrip with the existing road separating the hotels from the Beach. This is the exact layout at Copacabana. The point – of the scores of hotels there, not one was just off or on the beach. The beach was open to tourists and locals alike who bathed, played football, volley ball, all kinds of things together. If a hotel guest wants to go to the beach, he crosses the road at designated points from his hotel and walks to the beach.

One morning as I joined the Caricom Prime Ministers in the balcony of the room of one of them, where we were all waiting for the start of a breakfast caucus of Caricom Heads of Government, I pointed out to the Prime Ministers there, the remarkable fact that not one of the hotels was built right next to the beach and that everyone had access to the beach unlike the situation in the Caribbean. They all agreed that the Brazilians had planned it excellently, but one of them said to me that it was too late for the Caribbean.

I disagreed and I still disagree. It is not too late to save our Caribbean beaches from the lure of the tourist dollar at any cost. I am telling this story now to show my total support for the residents of Trouya, Bois D’Orange, Gros Islet who are trying to save the small and quietly beautiful Trouya Beach from a tourism development project that will change it forever and at best condemn us to using a track to get there and at worst, debar us from it all together. The residents have forwarded a petition to the Development Control Authority (DCA), signed by hundreds of persons, objecting to the proposed development on a number of grounds, including that it will violate the terms of a covenant they signed when they purchased their properties.

I support them whole heartedly and I am prepared to march, demonstrate and picket with them if necessary, not simply because as a former resident of Bois D’ Orange my family and I used that beach and still do, but because there is something more valuable to us than acquiring the tourist dollar- it is to preserve our patrimony, our heritage- the gifts of nature that the Almighty bestowed upon us for our pleasure and recreation and for reminding us that He exists and is the creator. Yes we can make use of them for our economic development but not to the point of selling them to foreigners, so much so that we can no longer have access to them and our descendants know that they are there but cannot even see them.

If the DCA does not accept the covenant argument of the Trouya petitioners, then it should rule in their favour on the grounds of preserving our patrimony. If the thinking is that the hotel development should proceed on economic reasons given the current parlous state of the St. Lucian economy, then it must be built in such a way that there is no hotel plant, next to the beach and that like Copacabana, it is open to all and sundry, visitors and locals alike- and not by giving locals an insignificant looking track called public access to the beach. This is an insult to us.

If other Caribbean governments want to think that it is too late to save our beaches, then we in St. Lucia must differ. I am of the view that there should be legislation debarring further hotel development directly next to our beaches. Copacabana shows that its is possible to have a thriving tourism industry with hotels that are not sitting almost on a beach, that are adjacent but sufficiently away from it to allow the beach to remain the accessible patrimony of the people.

It is not too late to save our beaches in St. Lucia or the Caribbean for that matter. Let the preservation of Trouya Beach in its original pristine beauty be the first salvo in a new hotel development policy that recognises the birthrights of our people. Future generations will praise us.