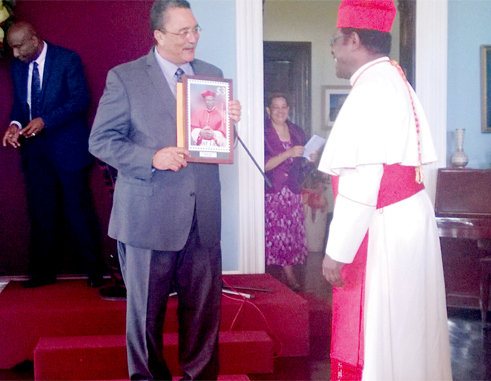 The ceremony welcomed members of the clergy, religious and laity of the Catholic Church, along with Prime Minister Dr. Kenny Anthony, whose portfolio includes the Postal Service. 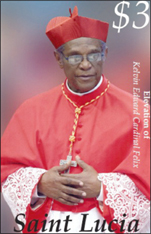 The guest of honour was one of Saint Lucia’s most celebrated adopted sons, Kelvin Cardinal Felix. The long-time Archbishop of Castries, Cardinal Felix became the first bishop from the English-speaking Caribbean to be inducted into the College of Cardinals on St Lucia’s Independence Day this year.

The issue of two stamps commemorating that event continues the Postal Service’s tradition of celebrating outstanding contributors to society.

The stamp issue commemorating the elevation of Cardinal Felix is, however, unusual. Postmaster General, Josiah Charles explained to the audience on Friday that it is an exceedingly rare occasion on which the Postal Service celebrates a living person with a stamp issue.

An exception in the case of Cardinal Felix was justified by his tremendous contributions to the social development of Saint Lucia, including his work in education, his leadership in the Catholic Church, and his involvement in poverty alleviation and social development.

Prime Minister Anthony presented first day covers and framed replicas of one of the stamps to Cardinal Felix and Governor General Dame PearletteLouisy, and was in turn presented by the Deputy Postmaster General. Cardinal Felix shared few a light moments with his audience and thanked all involved for doing him “such great honour” and for their participation in the project.

The $3 and $5 stamps are available at most of the 46 locations of the Saint Lucia Postal Service.