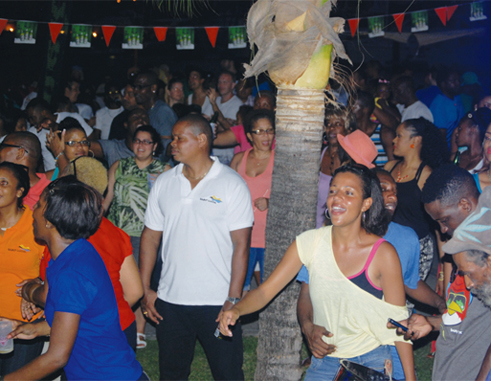 THE 9th Annual Atlantic Race for Cruisers Flotilla, which sailed from the Castries Harbour to Island Global yachting (IGY) in Rodney Bay last Sunday was hailed as a success by its organizers, namely the Tourist Board.

Tourism Minister Lorne Theophilus also sang from the same sheet as Tourism Director Louis Lewis, both claiming that the flotilla was the best ever.

Listening to them I inferred that they were referring to the crowd that gathered at the marina in the early afternoon to enjoy the “live” band, the steel band, the bouncing castle for the children that was erected on the grounds of the marina, the face painting that was taking place at one booth, and the number of people who were on boats when they left the harbour as evidence that the flotilla was the best ever.

To me there was nothing special about last Sunday’s event to label it ‘the best ever’ but then that’s only me. I usually see things a little differently from politicians and managers of events.

In fact, if I’m permitted to go just a little bit further, I would posit that last year’s flotilla was the best ever also for simple reasons: there were more boats leaving the Castries Harbour at the 12 noon cannon call. Also the seas were rough, in my view very rough, giving one an idea of what the boats from Las Palmas would have encountered on their 2700 nautical mile journey to Saint Lucia.

I recalled many reporters on board the media boat last year having to use whatever came to hand to protect their cameras from the rains above and the sea waters below as angry waves lashed the sides of the boat spraying water all over the deck. There was more fun on board and more grumblings too as some reporters’ equipment received a soaking from sea sprays. For me the atmosphere at the marina last year was pretty much the same last Sunday.

Compare that to last Sunday’s which was entirely smooth sailing and one would understand for me who was fortunate to be on both flotillas, which of the two I would bestow the title of “best ever” .

As noted earlier, different strokes for different folks and for some, last Sunday’s was the best ever, and so be it.

But before Theophilus pumped his fist in the air and Lewis raised a drink to his lips to celebrate what to them was the best ever flotilla, since the first one was launched in 2006 – shucks my apologies, they already did that (Check Tuesday’s paper. The first photo on page 10 depicts them doing just that), they should at least note the ARC’s flotilla could be worked into a major event beneficial to everyone, meaning visitors and locals alike.

In fact, the flotilla event could be seen as a development project. I believe that if a careful assessment of its impact on hotels and businesses in the area is conducted the Tourist Board would see the need to make next year’s flotilla the best ever.

Still looking at the flotilla as a development project I see it fulfilling the need of businesses in the marina, bus drivers plying the Castries to Gros Islet route, small businesses located in Gros Islet and across the road from the marina and the supermarkets close by. There are businesses I have missed, for sure but one gets the idea.

Bearing in mind that all sea going vessels could participate in the flotilla, even the canoes used by our fishermen, I see a greater interest being taken in sailing by my people. The people pushing our tourism should look into that. How about advertising the flotilla and encouraging our fishermen to participate!

How about a party boat or two as part of the flotilla? There was one such boat last Sunday but will it be a fixture? I guess time alone will tell. However, it would be nice to have that type of element in the flotilla.

How about the Tourist Board joining with IGY to make the flotilla a day-long event at the marina instead of the two or three hours.

There would be more booths, more fun-filled events, longer “live” acts on stage, even a catwalk as my buddy Stan suggested last Sunday to Lewis on which the ladies could strut their stuff.

Some of the businesses located at the marina were packed with diners, drinkers, loafers, etc., last Sunday making an extra dollar. Imagine what it would be like if the whole marina is transformed into a carnival, party atmosphere. And we know Lucians like a party. By four in the afternoon the place would be roaring as Lucians come to party. Hoteliers would be happy to allow their guests time to stroll in the marina to enjoy the atmosphere and the fun. Hey, less food to be eaten, less water to be used, less of almost everything for the hotelier if his guests spend a few hours away from him.

I could go on and on.

Tourism officials, I think, have fitted the picture in the frames of their minds so I’ll stop here.

Was last Sunday’s flotilla the best ever? I guess it depends on who you ask. What I do know, however, is that it can become bigger and better.