“International visitors will arrive by air and sea this winter, bolstering our local economy and providing opportunities for Saint Lucians to share our culture with tourists from all over the world. With a return flight from Dallas, Texas this (past) weekend, a grand cruise ship arrival and the kick-off of the Atlantic Rally for Cruisers, Saint Lucia is poised for tourism success, and we thank all our tourism partners working diligently to showcase our cultural experiences, local cuisine and renowned activities to visitors,” remarked Tourism Minister Hon. Dr. Ernest Hilaire. 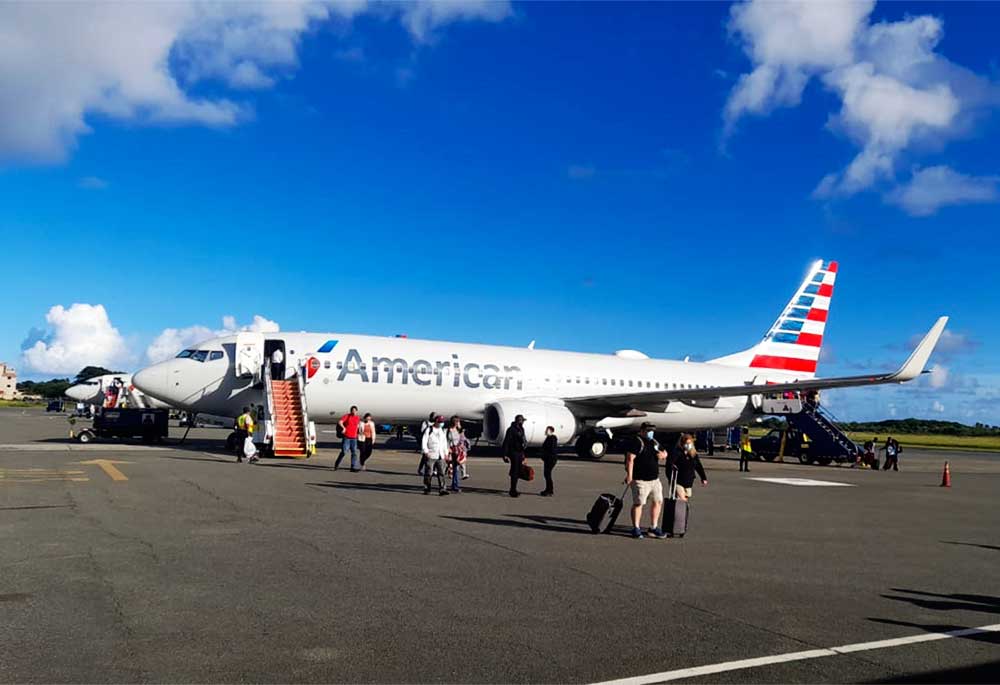 American Airlines flight 1083 from Dallas, Texas (DFW) arrived at Hewanorra International Airport (UVF) last Saturday, signaling the addition of an important gateway for the upcoming season. Originating from the fourth busiest airport in the U.S., the DFW-UVF nonstop creates a greater ease of connectivity to the west and mid-west regions.

“The solid performance of this service introduced last summer, evidenced by consistently strong load factors, speaks to the proven demand for Saint Lucia and the sustainability of this route. The return of this service has resulted in more airlift to our destination than ever before. It’s truly an exciting time for us,” said Richard Moss, Senior Sales Manager, Saint Lucia Tourism Authority.

On Monday, Mein Schiff 1 of the Tui Cruise line sailed into Port Castries for its inaugural arrival this season. The ship hosted 1,440 passengers. Hundreds disembarked the ship to explore local offerings such as shopping excursions and tours. All passengers were subject to safety protocols such as negative Covid-19 testing prior to arrival and social distancing.

Tourism officials welcomed the ship with a celebratory ceremony and a commemorative plaque was presented to Captain Omar Caruana.

The countdown has begun for the arrival of the 36th annual Atlantic Rally for Cruisers, which set sail from Grand Canaria on Monday. Some 147 yachts with more than 900 crew on board will embark on a 2,700 nautical mile transatlantic voyage to Saint Lucia. Vessels from 29 nations are expected to arrive in Saint Lucia beginning December 9, all following Covid-19 protocols including negative PCR testing before arrival.  This celebrated sporting event is a major economic contributor to the local economy and many of the tourism businesses that have been affected by the pandemic will benefit from the arrival of the yachts.

Cruisers, racers, and multihulls; sleek ocean racing machines alongside comfortable family cruisers; super yachts with professional crews, and excited friends living the dream – these were the boats and sailors who departed Las Palmas de Gran Canaria to start the 36th Atlantic Rally for Cruisers (ARC). With crew representing 38 different nationalities, the ocean crossing community has filled the docks of Las Palmas Marina for the past two weeks.

Spreading across the horizon the fleet of white sails made an impressive sight as the crews waved goodbye to Gran Canaria for a great adventure on the ocean. 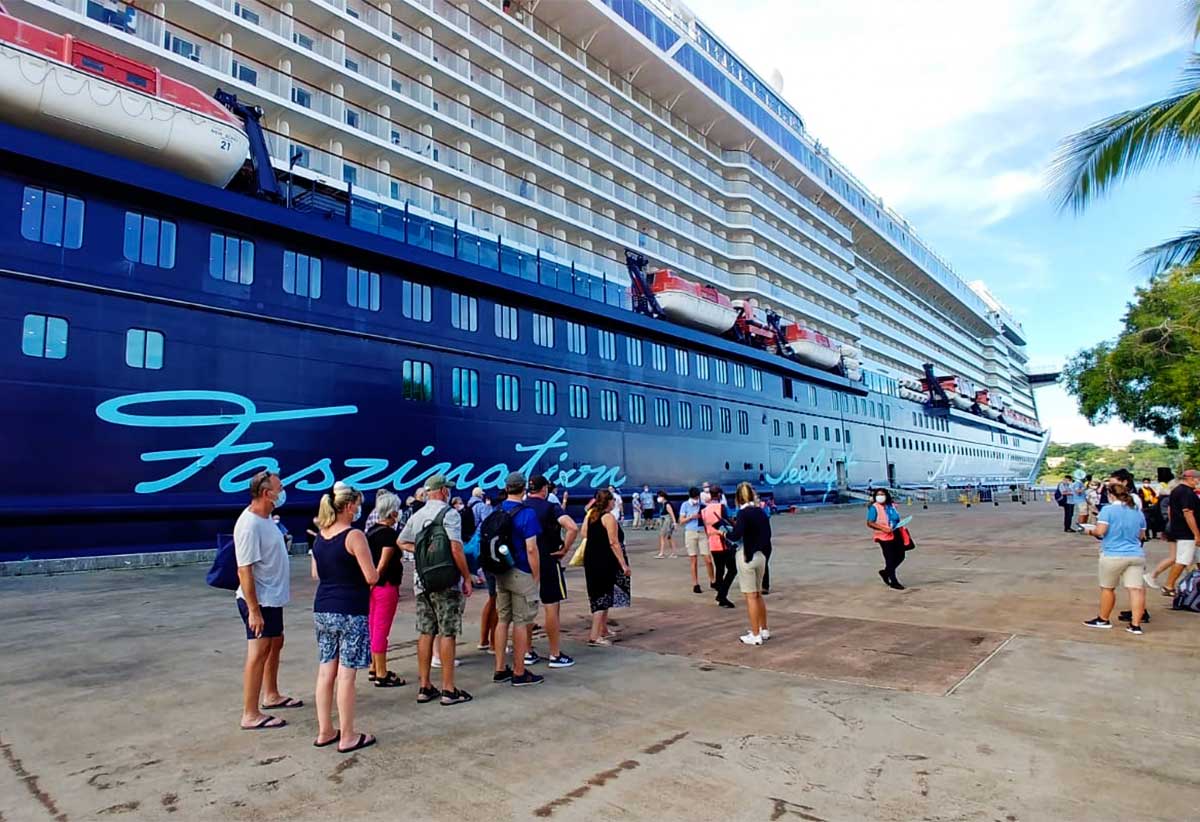 Out in the starting area, the wind was said to be steady at 12-15 knots blowing from the South-East. The first start, at 12:30 local time, was for the Multihulls and Open Divisions, with Outremer 51 Moxie (USA) leading the charge. In recent years, it has been the dashing multihulls that have claimed Line Honours in Rodney Bay, and previous victors Banzaï (FRA), GuyaderSaveol (FRA), and Minimole (ITA) all returned to the ARC this year to battle to reach the rum punch first. A total of 31 catamarans and trimarans are sailing in the ARC, and the non-competitive Open Division sailing features the 38m traditional schooner Helena (FIN), owned by the Finnish Sail Training.

Next it was the turn of the Racing Division to get into position for their starting sequence. The wind eased slightly to 10-12 knots as the signal sounded at 12:45 and the 19 yachts headed over the start with sails tuned. The Racing Division lines up the pros against the amateurs, with a great opportunity for  all to compete on the same ocean course. French sailing legend JP Dick is back for his fourth ARC crossing on JP54 The Kid for Ville de Nice (FRA) and will be facing a new monohull race challenge from 12 Nacira 69 (ITA), an Italian crewed carbon flyer, and Cookson 50 Furiosa (EST). But it was performance cruiser RM1270 Grace LR (GBR) that made the best start with skipper Chris Lewns positioning well on the line to lead the racing fleet away, and The Kid for Ville de Nice crossing just after.

Finally, the largest fleet, the Cruising Division, came into the fray with 92 yachts beginning their adventure. Onboard the Committee Vessel, ARC Rally Control began the final start sequence and the horn sounded to signify the start at 13:00. First to cross the line was Montana (DEU), a Swan 48 S&S sailed by German skipper Markus Bocks taking part in the ARC for a third time. The procession then continued with boats of all shapes and sizes leaving Las Palmas in their wake.

The sailors have a calm introduction to their Atlantic crossing, and the wind is going to stay quite light and variable for the first few days before the boats that take a more southerly route start to pick up the trade winds. At the Skippers Briefing, meteorologist and ocean sailor Chris Tibbs advised for the boats to head south following the African coast to the latitude of the Cape Verde before pointing their bows westwards to Saint Lucia.

The departure of the ARC fleet sailing directly to Saint Lucia today means a combined total of 208 yachts are crossing the Atlantic under the ARC banner in November 2021. ARC+ fleet of 67 yachts departed Mindelo, Cape Verde for their second leg of their crossing last Friday, bound for Grenada. A further 60 yachts will join the first edition of ARC January, setting sail in the new year in a third Atlantic crossing rally organised by World Cruising Club sailing from Gran Canaria to Saint Lucia.

Prior to today’s departure, crews undertook the necessary PCR test to ensure they were going to sea Covid free and complying with the health protocols for their arrival in Saint Lucia. All ARC boats are fitted with YB Tracking satellite trackers, allowing family and friends to follow the fleet from the comfort of home.

The majority of boats will take 18-21 days to make the 2700 nautical miles Atlantic crossing, arriving in Rodney Bay Marina, Saint Lucia. Whatever time they make landfall, every boat will be met at the dock by Saint Lucia Tourism Authority and World Cruising Club staff bearing a welcome rum punch and cold drinks.