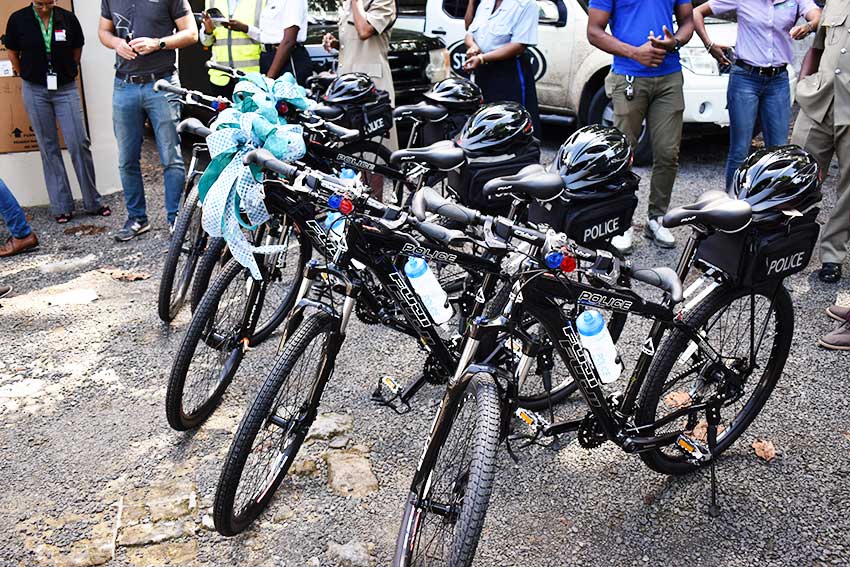 THE Royal Saint Lucia Police Force (RSLPF) has expressed gratitude to the Windward and Leeward Brewery Limited/DuBoulay’s Bottling Company (WLBL DBC) for the generous gift of six bicycles and bicycle safety gear to the Bicycle Patrol Unit of the RSLPF. The handover ceremony was held at Police Headquarters at Chesterfield on Friday 22nd November, 2019. There to receive the gift was Assistant Commissioner of Police, CrucitaPelius, and ASP Elvis Thomas.

Fayola Ferdinand, Corporate Affairs Manager for WLBL DBC, who was present at the handover event, announced, “We are here as part of a large programme by WLBL DBC to support initiatives in Saint Lucia that benefit not only our communities, but our larger society. We are excited that this initiative has come to fruition and would benefit not only the RSLPF, but also the citizens of Saint Lucia.” She was accompanied by WLBL DBC’s Safety, Health and Environment (SHE) Manager, Tessa Innocent Bernard, who imparted bicycle safety tips to police officers.

Thibault Mesqui, Managing Director of WLBL DBC, who was also present, said that the company had been supporting initiatives for Corporate Social Responsibility (CSR) in Saint Lucia for a long time. To reinforce its support of CSR initiatives, WLBL DBC, through its ‘Bring a Better World Campaign’, has invested in sustainable projects that help develop the environment, the people and communities in which WLBL DBC operates, according to the Managing Director. He said that the company has made various donations over the years to a number of ministries and charitable causes in Saint Lucia, and noted, “Our partnership with the RSLPF goes beyond the donation of these bikes and safety gear today, and we are happy that they [RSLPF] supported and endorsed our responsible consumption campaign ‘I Pledge’ which was launched earlier this year.”

Mesqui said the partnership between WLBL DBC and RSLPF on this CSR initiative will support community policing. He also indicated that this initiative was one of many the company had embarked on for the year, and that they remained committed to growing with Saint Lucia by investing in the people and by innovating and developing their brands.

“I hope that this donation will support the RSLPF in their crime-fighting activities,” Mesqui said.

Crusita Pelius, Assistant Commissioner of Police, took a moment to enunciate the gratitude of the RSLPF to members of the public who provide information to help solve crime. She said that the RSLPF was also grateful whenever corporate citizens donated tools or equipment which made crime-fighting easier. She remarked, “We want to say clearly that we are very thankful in you donating to us today some more bicycles to augment what we have so far in our unit. Let me assure you that these bicycles will be put to good use and we are looking forward to increasing our patrol in the city during the Christmas season.”

Pelius said the need for a Bicycle Patrol Unit was realized a few years ago when the executive of the RSLPF met for a review of crime-fighting strategies. She said, “The Bicycle Unit plays a critical role in meeting law-enforcement objectives as it relates to crime-prevention… and increasing the presence of officers in the city will no doubt do just that.”

Pelius expressed the Force’s concern for the safety of students and emphasised that the Bicycle Patrol Unit was particularly effective in reducing crime in school zones within the city. In closing, Pelius stated, “As you know, we always augment our patrols, we always increase our patrols in the city, and I will not just say in the city in particular, we increase our patrols throughout the island because we have citizens everywhere and we are concerned in making Saint Lucia safe, not only for our citizens, but visitors alike. Let me tell you that these bikes will be put to very good use.”