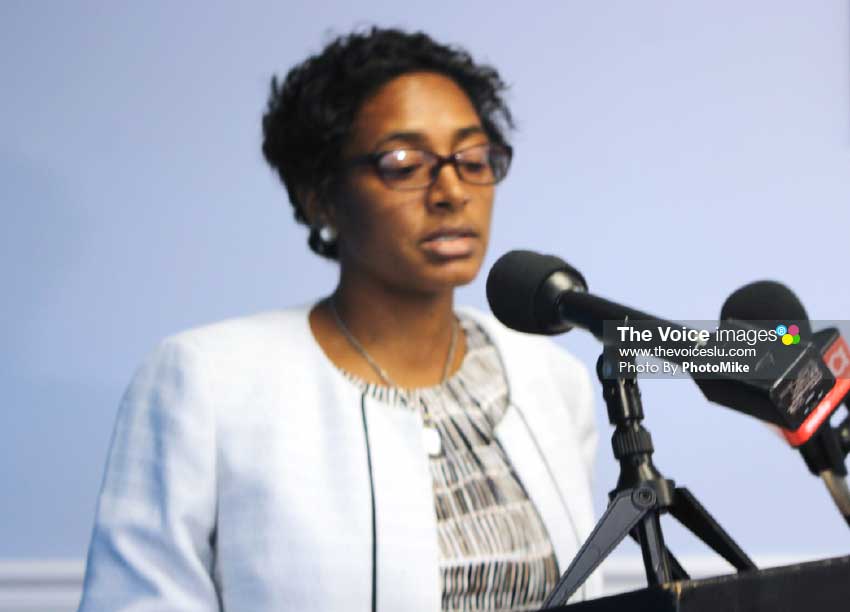 NO one from Cayman Health City will be coming to Saint Lucia to run or manage the Owen King European Union (OKEU) Hospital.

So said the Director of Implementation in the Office of the Prime Minister, Nancy Charles who also took a swipe at persons claiming government puts the needs of private investors over that of Saint Lucians, referring to politicians and talk show hosts specifically.

Stating that it is fictitious on the part of those persons to do so, Charles implored Saint Lucians to value the effort and time being spent on health care by the Government of Saint Lucia while at the same time pointing out that the government was not where it wanted to be at this time with health care.

“I think that as an administration we have said over and over again that we are not where we want to be or should be with regards to health care,” Charles said.

Prior to the general elections of June 2016, the opposition UWP Administration with Allen Chastanet as its leader repeatedly condemned the Labour Party government for its handling of health care in the country. Now into their fourth year as a government, the UWP Administration is experiencing a reverse in fortunes in that they are now the ones being reproached, by the Labour Party opposition, for their handling of the country’s health sector.

Charles, in an attempt to take the edge off the criticism noted that government had indeed invested heavily in the country’s healthcare and would continue to do so.

As it relates to St Jude Hospital and OKEU Hospital Charles said, “It’s been very challenging in getting where we want to be.”

One challenge faced at the OKEU is equipment going bad after sitting idly for years, an example being the air conditioning unit. It has since been announced that a new manufacturer had to be sourced to sort out the problem with the unit that had gone bad. The old manufacturer has since gone out of business.

Charles further explained that there is a lot of fixing and re-engaging to do on some of the equipment, which has caused further delays in the hospital’s official opening.

Another issue causing a delay with the opening of the OKEU Hospital is the transition from Victoria Hospital. According to Charles a partial transition has taken place in that certain services are already being processed at the OKEU Hospital, including dialysis and outpatient care.

“We started a partial transition, however, because of the legislation that was passed by the previous administration making OKEU and the Wellness Centre a statutory corporation called the Millennium Heights Complex, it meant that there could not be full transition of Victoria Hospital into OKEU in its current structure,” Charles said.

She noted government could not make a full transition without examining the legalities of the move, one legality being how to deal with Victoria Hospital staff as public servants transitioning to a statutory corporation.

“So, you would have to make the necessary adjustments and arrangements to ensure that you take care of the staff and that people are not disadvantaged in any way when you have the transition,” Charles said.

Another issue impacting on the opening of the OKEU Hospital at this time is the type of management structure best suited for it.

Said Charles, “We wanted to have a structure that ensures sustainability and continuity of OKEU, and ensures that the hospital can manage itself. As it stands, people are complaining about Victoria Hospital. One of the major issues there (Victoria Hospital) is that of money and funding so the Prime Minister wanted to ensure there was a proper governing structure to ensure there is accountability, there is responsibility and proper maintenance of this new facility and the expensive equipment there.”

She added that government wants to guarantee sufficient funding to ensure that when persons come to the OKEU Hospital they could at least pay for the visits.

“And that’s why the issue of the National Health Insurance came into play. We wanted to make sure that we achieved these two things in order to have a full transition,” Charles intoned.

According to her, the Ministry of Finance together with the Caribbean Development Bank and the World Bank have started a project that looks at how the government can incorporate if not a full National Health Insurance then a partial one. Charles further explained that the government has been in negotiations with Cayman Health City for a consultancy service to assist in putting in place a proper management structure at OKEU Hospital.

“So, you have been hearing a lot that we want to privatise the hospital and give Cayman Health City the hospital to run and so forth. None of that is the case. We are negotiating a consultancy contract and by that, I mean they will be bringing in professionals because they have the wherewithal and they know how to put in certain structures for hospital management and ensuring continuity. They will be assisting us with our locals who will be hired for the job, teach them, train them so that they can eventually manage the hospital on their own. No one from Cayman Health City will be coming to Saint Lucia to run or manage OKEU,” Charles said.