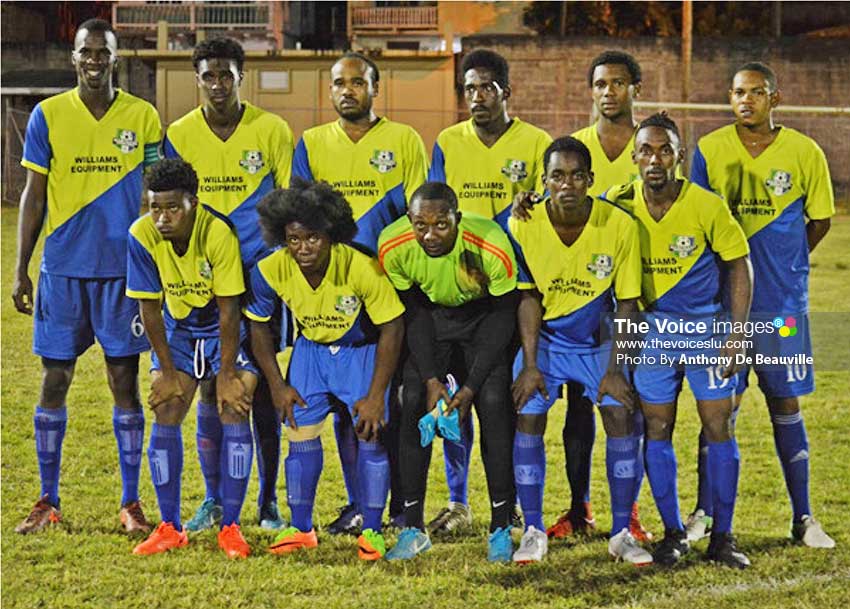 The action continued in the Saint Lucia Football Association Inc. sponsored National Lotteries Authority Island Cup with two double headers over the weekend. The highlight was a 5-1 drubbing by Gros Islet over Vieux Fort South, Nicholas Lawrence scoring a hat trick in the process and defending champions Marchand getting a comfortable 3-1 win over arch rivals Central Castries to take charge of Group B with 15 points.

Sadic Bertin put Laborie ahead in the 3rd minute of play, Lee Avril made it 2 – 0 in the 21st minute and despite Mon Repos’ efforts to pull one back the score line remained 2 – 0 at the halftime whistle of referee Kevin Antoine.

On the resumption, referee Kevin Antoine had to be substituted after he aggravated a hamstring injury. He was substituted by Nigel Mathurin who at the time was referee assistant No.1.

The change of referee did not stop Laborie’s momentum; in the 47th minute Kendal Yarde made it 3 – 0. Mon Repos for their efforts pulled one back in the 55th minute from the boots of Kishon James, while Joash Wilson sealed the deal in the 66th minute to give Laborie a 4-1 victory.

In the second game on the evening, refereed by Kim Charlery, Gros Islet in a clinical display kept their playoff hopes alive with a 5 – 1 drubbing of the much fancied Vieux Fort South team.

Vieux Fort South with five players set to leave the island on Thursday 5th September for national duty in the CONCACAF Nations Cup, found themselves short of some key players. The national players Vino Barclette, Gregson President, Jevic Mc Farlane, Noah Nicholas and Antonio Joseph were all off the field, as were three injured players, Antonius Mayers, SarnSavery and Kimlan Moses. The Gros Islet team took full advantage of a weakened VFS team.

Gros Islet got their goals with a hat trick from Nicholas Lawrence in the 13th, 34th and 55th minute, while there was one each from Elijah Louis in the 28th minute. Aramis Lorde made amends in the 85th minute after squandering three easy scoring opportunities.

Moses Henry had earlier shot Vieux Fort South into the lead in the 5th minute of play.

VFS would have themselves to blame for not putting away their opportunities including a penalty that was taken by their captain Jamil Joseph, but was saved by Giovanni Deterville between the uprights.

It must be noted that Canaries, Roseau Valley, Micoud and Gros Islet have completed their fixture, while Vieux Fort South and Laborie have two games remaining and Desruisseaux one.

In the second game, a Castries derby, Marchand defeated rivals Central Castries 3 – 1 with goals from Tasimba Joseph in the 21st minute and Janous Lesmond in the 41st and 52nd minute.

Central Castries pulled one back a little too late lone, the goal scored by Wilson Charlemagne in the 88th minute.

With the completion of the preliminary round of matches in Group B the points standing are as follows: Marchand – 15 points, Dennery – 14 points, Central Castries – 12 points, Babonneau – 9 points, Mabouya Valley – 8 points.

The leading goal scorers in the tournament to date are Tev Lawrence with 8 goals followed by Brandon Modeste with 5 goals and Rai Gaspard and Stephon Longville with four goals each.