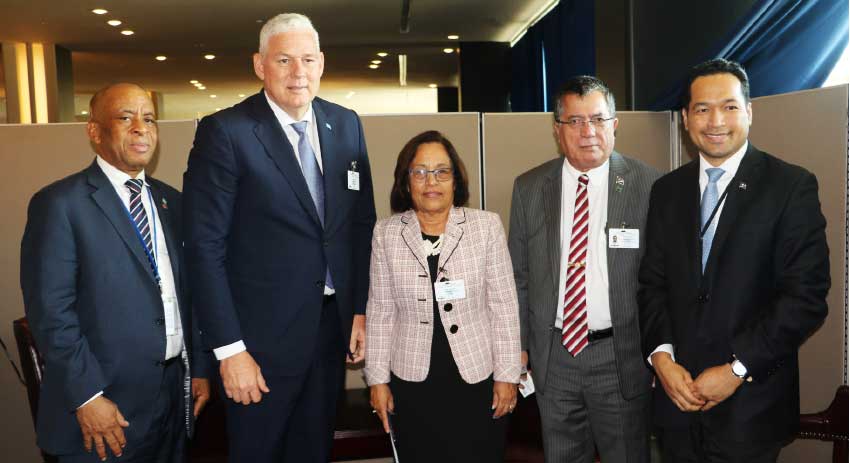 ONCE a year all the nations of the world meet at the United Nations to lobby on behalf of the countries, make a statement or make connections. This year the Saint Lucia delegation to the 74th United Nations General Assembly was led by Prime Minister Allen Michael Chastanet and included External Affairs Minister Sarah Flood Beaubrun, Ambassadors based in the US Cosmos Richardson and Anton Edmunds and CARICOM Ambassador Elma Gene Isaac.

Saint Lucia played a major role at this year’s United Nations, as Prime Minister Chastanet also serves as CARICOM Chairman. At the Climate Action Summit which opened the event the Prime Minister called for less talk and more action. He applauded the impassioned speech delivered by Swedish Environmental Activist 16-year-old Greta Thunberg who focused on the risks posed by global warming. Prime Minister Chastanet also spoke about the plight of the Bahamas and the threats faced by Caribbean islands during the hurricane season and as a result of Climate Change.

Prime Minister Chastanet led the way on discussions with India Prime Minister Marendi Modi at the India-Caricom Summit held on Wednesday. At that event India announced the setting up of the Regional Centre for Excellence in Information Technology in Guyana’s Georgetown and a $14-million grant for community development projects in the Caribbean as well as a $150 million Line of Credit for solar, renewable energy and climate-change related works.

Overall for countries of the Caribbean represented at the United Nations, this was to ensure that Small Island Developing States (SIDS) were finally heard. The visit by the UN Secretary General to Saint Lucia in July of this year already signaled that small islands are being given priority.

In his statement at the High-level meeting to review progress made in addressing the priorities of SIDS through the implementation of the Accelerated Modalities of Action (SAMOA) Pathway Prime Minister Chastanet stated that CARICOM welcomed the convening of high level meetings that addressed these four critical areas in an attempt to focus attention on the synergies that exist and to accelerate implementation actions.

“CARICOM has made clear that the absence of accelerated, meaningful, actions to implement agreed goals; and the reluctance to fulfill agreed commitments and obligations; threatens our very existence in this global community. We arrive at this the fifth and final summit of the week, to review the SIDS programme of action. The SAMOA pathway recognizes that genuine and durable partnerships are essential to advancing the sustainable development of SIDS. CARICOM applauds and commends the partnerships that have developed and solidified since the adoption of the pathway in 2014.”

“As we look ahead beyond this week, it is clear that there is an urgent need for a renewed commitment from our partners – from member states, civil society and the private sector,” the Prime Minister added. “We urge the development of SIDS specific tailored responses to address the unique and considerable challenges that continue to bedevil all SIDS.”

Prime Minister Chastanet delivered his statement to the UNGA on Friday afternoon in which he continued to speak for SIDS but focused on Saint Lucia’s plans to take control of her own destiny and the development agenda of his Government.

“My island home of Saint Lucia is small, just 238 square miles with a population of under 200,000. We are however fortunate to be members of strong regional institutions,” he noted.

“Explore a little and you will note that as a sub-region, eight countries within the Eastern Caribbean, including Saint Lucia use what has become one of the most stable currencies in the world, the Eastern Caribbean dollar. We share a single court system, and we pool our resources in providing a large number of services for our people,” he said. “In our wider Caribbean community, we cooperate in even more areas: a University of international renown, our own development bank, a Common market, and a regional security mechanism, are but a few of our successes.

“I highlight these achievements to signify that we are not a region of people who sit on our hands waiting to be rescued. In fact, as a region we have worked diligently post-independence, to establish the institutions and fashion the responses to deal with the challenges that confront us, and we have achieved much success in so doing.”

Prime Minister Chastanet says that Saint Lucia like all other nations of the world has a goal to chart a sustainable development path that benefits every last citizen.

“A goal to ensure that all are clothed, fed, and have a roof over their heads, with access to proper education, health and security – to provide these basics that lay the foundation that will promise a better future. Is that not the aspiration that we leaders all have for our people? Yet in the face of our ambitious sustainable development goals, we SIDS continue to have to battle with insurmountable challenges, many as a result of rules and systems that do not create the mechanisms and the requisite urgency to address our unique challenges.”

The Prime Minister went on to condemn so called blacklists that stymie the development of small states.

“Some of these rules impose restrictions on states, in the absence of credible evidence to support claims of wrongdoing,” he said. “Our islands are being blacklisted; a demeaning and unfair practice that results in some instances, to effect irreversible damage to our reputations. So for countries like Saint Lucia which has the ambition to be self-sufficient and aid free, we are precluded from participating in the financial services sector; an area in which we have a comparative advantage.”

Finally Prime Minister Chastanet stated: “I would like to be able to boast of a United Nations where small nations like mine receive a fair hearing and genuine empathy when appropriate. A United Nations where once the case is made, there is an examination of conscience followed by a commitment towards change.”

The Saint Lucia delegation is expected to wrap up their time in New York with a town hall meeting with Saint Lucians living in the US, on Sunday.