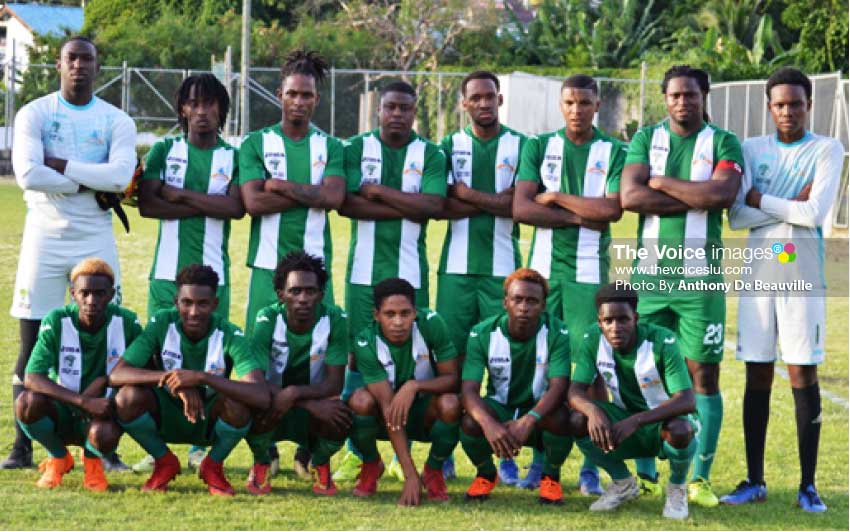 FOLLOWING a one day break to allow sports enthusiasts to take in the Hero Caribbean Premier League T20 cricket competition currently taking place at the Daren Sammy Cricket Ground, football action in the 17th edition of the Blackheart Production/Saint Lucia Football Association (SLFA) Inc. returns to the Phillip Marcellin Grounds (PMG), Vieux Fort with the first set of matches in the second round of the tournament.

Both Laborie and Vieux Fort South received a bye into the second round of the tournament.

On Thursday evening, in the final preliminary round of matches at the PMG, defending Island Cup champions Marchand and Babonneau appeared evenly poised from the onset with both teams creating a few chances. However, a defensive blunder proved costly for the Babonneau team as Jn. NaieLesmond capitalized on it to put Marchand 1 – 0 up, despite several surges and attempts to score and maintain their 1 – 0 advantage at the end of the first half.

On the resumption, Marchand was soon reduced to ten players as their No. 12 was sent off for picking up a second bookable offence (yellow card). This didn’t seem to deter them for very soon they were 2 – 0 up courtesy an own goal.

However, Babonneau was able to pull one back to reduce the deficit, but by then it was a little too late as Marchand held onto their 2 – 1 advantage to secure their place in the next round.

In the second encounter, Soufriere fared pretty well against the Canaries team as they held them to a goalless first half.

The resumption saw Soufriere taking the fight to their opponents and they were soon rewarded with a goal by Lance Andrew, as they went on to book their place in the next round with a 1 – 0 victory.

Soufriere played with a lot of grit throughout despite their players hitting the turf on a regular basis. On the other hand Canaries was flat and didn’t look as sharp in comparison to their form in the SLFA Island Cup.

Meanwhile, two Castries teams squeezed their way through the second round on Wednesday evening, following mid-week preliminary matches at the same venue.

In the first match of a double header between Roseau Valley and Central Castries, the latter took an early lead via the penalty spot, a goal scored by Emery Edward in the 10th minute. Despite the fast paced game by both teams and numerous squandering scoring opportunities at either end of the pitch, Central Castries was able to hold onto their 1-0 advantage at the end of the first half whistle of referee Dolivera George.

On the resumption, Roseau Valley came out firing on all cylinders as they continued to press home for the equalizer, but the Central Castries defence stood their ground despite Roseau Valley beating the outside trap on three occasions and in the process squandering all three scoring opportunities, two being a one and one with the goalkeeper and the other kicked wide from the uprights.

In the second encounter, La Clery with a combination of youth and experience nosed ahead of Vieux Fort North 1 – 0 with a goal courtesy Craig Elidore, and that’s how the scoreline remained up until the halftime whistle.

At the resumption, the exchanges on the pitch were the same, despite Vieux Fort North squandering three clear opportunities. On the night, Vieux Fort North was the better team on the pitch, but as the saying goes, ‘goals win matches’. No further goals were scored as La Clery held onto their 1 – 0 advantage and advanced to the next round.