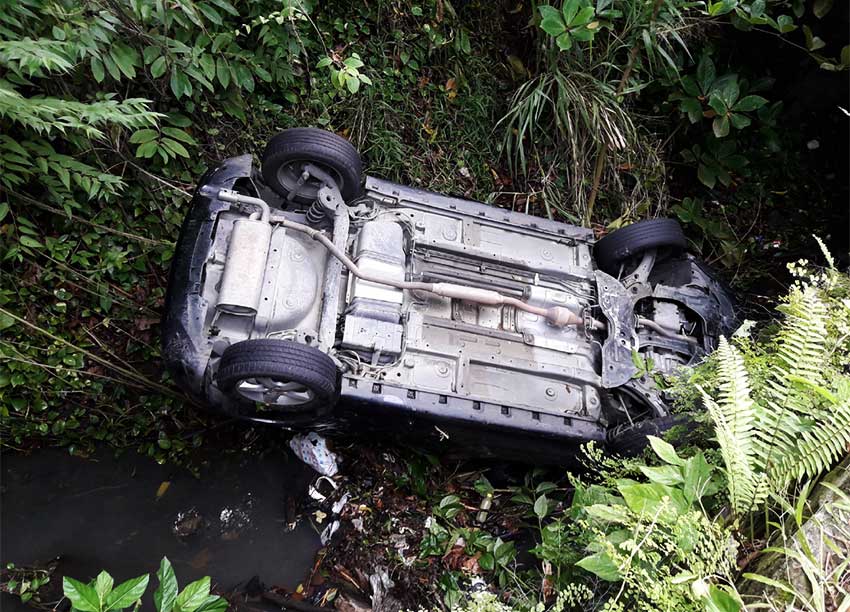 FATAL vehicular accidents are usually the ones, if not the only ones, that make it to the news. –But there are also vehicular accidents in which persons escape unscathed, which are just as worthy of being noted as well. On the rainy morning of Monday September 23rd, two male students from the Sir Arthur Lewis Community College were onboard a motor vehicle, making their way to school when they incidentally plunged into a ravine near Waterworks Road, between Sunbilt in Cedars and Ravine Chabot.

The vehicle landed on its back but the young men managed to escape without any signs of physical injury. Residents and onlookers were bewildered when they discovered that the young occupants were both alright. According to the driver of the vehicle, he was driving down from Sunbilt toward Waterworks Road when he encountered a vehicle quickly approaching from the opposite direction near the centre of the road. In order to avoid collision he navigated his vehicle more to the left where it slid off the slippery edge of the road and into the river.

The driver of the oncoming vehicle was nowhere to be seen. It must be noted however, that a number of vehicles have plunged into the very same spot of that ravine before, as the road is steep, narrow and very slippery when wet. It must also be noted that motorists are prohibited from accessing this particular hill from Waterworks Road until the end of a certain time. The vehicle which the college students tried to avoid should not have been heading in their direction at the time.

In spite of this mishap the young men are alive and well, which is a major reason to rejoice. Too many young lives have been lost on our roads, that we must show appreciation for the lives which are faced by similar circumstances without the misfortune of suffering the same tragic fate. Some disappointment may ensue over the damaged vehicle, but immense gratitude for the lives of these young men will far diminish any disappointment. Accidents are one of the tragedies in life that will always occur. It is easy to criticise and it is always easy to judge; but amidst our criticisms and misplaced judgements, we must not forget to appreciate the blessings that we can still hold on to.