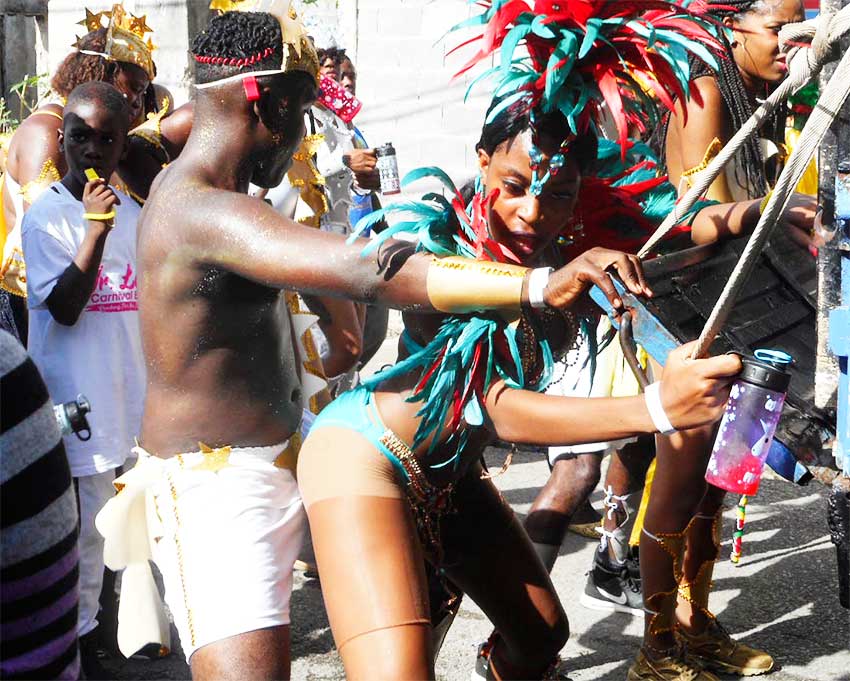 I sat with da boys on Nestor’s Sab Block, on Carnival Day, Saint Lucia 2019, and was inspired by the wicked and provocative rocking, wining, grinding, jamming, ramming and mind-boggling revolving, of practically naked Lucian woman “batty”, in the natural, earthy warmth of the Sab, at Sans Soucis, Castries – to put these words to paper – on the nudity phenomenon that has now assailed Lucian Carnival.

I was at once amused, bemused, fused, and almost confused, at the hundreds, thousands of beautiful, delectable Lucian females, showing us their true “bad-in-bum-bum” power, in almost stark nakedness; that relentless shaking, jamming, ramming on my poor eyes, my poor mind, provoking my wicked but futile imaginings. These near-naked “bad-in-bum-bum” beauties rocked me mercilessly, cruelly, ruthlessly, messing up my more fertile and erectile sensibilities as a Lucian macho man, with a history of a firm fetish for the better endowed female member of our Lucian Homo Sapiens. What a hearty party it was, just sitting there, hawk-like, in the great company of other hawks like “Nenes”, “Vee” and “Coco”, with my beastly-cold Piton Beer in hand – thanks originally to Chemist Jimmy “Hambone” Evelyn – soaking in these “bad-in-bum-bum” vibrations, all compliments Saint Lucia Carnival 2019!

I verily believe that Vee, Nestor and Coco were also lasciviously “cooking” that day – although they will deny it – yet my Comrades may not have been as “bad-in-bum-bum” bowled-over as I was. After all, I have been away from Saint Lucia Carnival for 11 years – having spent the last decade at CARICOM in Guyana – while da boys on Nestor’s Block have had no such silly sabbatical. But, be that as it may, I could not help but feel the manifestation of that powerful, tangible, ferocious, almost maddening, animal-like instinct, a very deep, very profound yearning, emanating from our Saint Lucian female revelers, to just want to be naked! It seems that Saint Lucian women, no matter their social or financial caste or category, in our quite well defined and stratified Saint Lucian society, just want to be naked during carnival!

I sat entranced, watching, peeping, enjoying the gyrations, bawling in my mind, and growling deep inside. I could not help but observe the acute emphasis on nakedness, as much of it as could be displayed by our beauties. Images of Carnival do Brasil (Brazil Carnival) were conjured up in my bruised, blistered, busted and battered psyche. I recall that Brazil’s Carnival was at one time not so much tainted by human nakedness. The emphasis was on Brazilian cultural expositions, Brazilian history and Portuguese colonialism, and general Brazilian education! But Carnival do Brasil quickly became a macabre act of human nudity and “indecent” exposure. Clearly, perhaps inexplicably, in Brazil also, women just want to be naked!

While continuing to sit at Nestor’s Sab Paradise, like a felonious, fallen angel, entranced in that stupor of Lucian-woman naked batty, I soon teleported from Brazil to Trinidad & Tobago. Again, the empirical evidence shows that in Trinidad as well, Carnival was at one time about the cultural, artistic and historical expressions of Trinidad and Tobago in its various phases of development, from a colonized and Slave society, to the relatively industrialized economy that Trinidad & Tobago is today. Well it has become clear to observers in the Caribbean and in Trinidad and Tobago, that one of the most distinguishing features of Trinidad Carnival today, is that deep, urgent yearning by Trinidadian women, to just want to be naked.

Clearly, there is a need for our women to share with us, their male counterparts, just what it is about their biology and/or physiology, psychology, sociology, or sexuality that so excites them, and leaves them with that evidently deep, urgent, burning sensation and heated yearning, to just want to be naked! As a male member of Homo Sapiens, I honestly, truthfully, wholeheartedly, cannot confess to any such yearning for nudity on my part. I am no Carnival “animal”, but I was a Cozy Guzzlers Carnival Band reveler for several years, sailing upon the waves of heat produced by the Capital’s asphalt laden roads. I sailed the Cozy Guzzlers “Matloes” ship with Captains like “Zeks”, “Antone” Modeste, Vaughn Charles, and others, as well as with numerous Deck Hands, Privates, and Petty Officers, including “Sally”, a fallen sailor who is now at rest from his labours on the good ship, Cozy. Thousands of other men have been “chipping down the road” of Saint Lucia during Carnival for decades now, and I have never observed any propensity for excessive nudity on their part. In fact, it is quite the contrary; Lucian men, and men in general, do not want to be naked.

But there is an obvious craving by our women, and it seems, women generally, in Carnival festivities, to just want to be naked. And I don’t think it’s an emotion that necessarily emanates from the craving for bacchanal that Carnival ignites. There seems to be a deeper underlying socio-psychological-biological factor, that applies in the case of the female members of Homo Sapiens in this matter, and this article might be presenting an opportunity for a study to be undertaken on this female nudity phenomenon, if indeed such research has not already been executed somewhere.

All the above having been said, these lines are no criticism of our Lucian “babes”. Like de Mighty Sparrow, give me my “drunk and disorderly”, beautiful, sexy, tantalizing, rocking, grinding, wining, misbehaving, “bad-in-bum-bum” Lucian Carnival female revelers, any time, and any day!